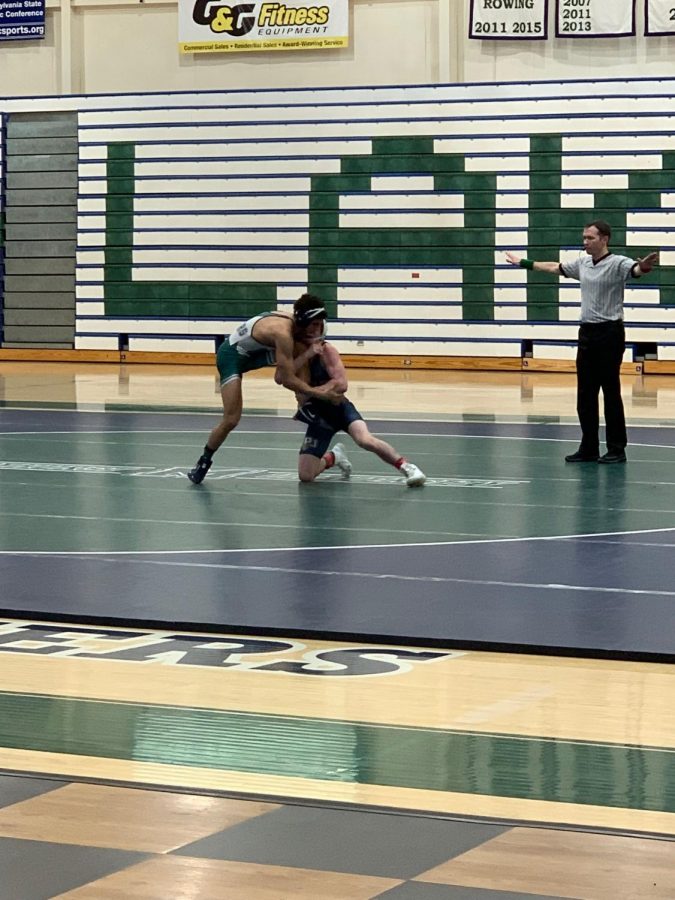 Mercyhurst’s Alexis Soriano grapples with Matthew Siszka of Pitt-Johnstown. The Lakers fell 9-30 against the Mountain Cats, but were victorious 30-12 against University of Findlay for Senior Day.

It wasn’t originally planned to play out this way, but the Mercyhurst Lakers wrestling team found themselves hosting the Pitt-Johnstown Mountain Cats and the University of Findlay Oilers back to back on Feb. 8-9.

The Oilers were at the Mercyhurst Athletic Center after the Lakers’ Jan. 30 hosting affair was canceled due to the cold weather. The Lakers fell 9-30 to the Mountain Cats, but turned around with a 30-12 victory over the Oilers.

“I knew we would have a really tough time against UPJ,” wrestling Head Coach Mike Wehler said. “They are one of the top teams in the country. We wrestled well, but their experience helped them get the edge.”

But the Mountain Cats’ Joey Alessandro recorded an 8-0 major over Aidan Burke at 141, sending the momentum back to the visitors, as they would go on to win the next two bouts. Top-ranked Mountain Cat Chris Eddins took a 16-0 technical over Mike Clark at 149, earning the fall with just five seconds left in regulation.

Corey Falleroni took two and a half minutes of overtime to defeat the Lakers’ Kevin Kinyua 7-5 at 157. The Lakers’ Logan Grass cut the team deficit to nine after a 4-0 shutout of Devin Austin at 165, but the Mountain Cats’ Edwards and Biddle clinched the series for the Mountain Cats before the Lakers’ Jacob Robb defeated Tyler Oliver 4-1 at 285.

The following day, the Lakers won their senior day 30-12 over the University of Findlay Oilers. “We did a lot of good things against Findlay which helped us swing those results in our favor,” Wehler said “It’s a bit harder to go back to back days but with the cancellation we had to do it this way. Our guys responded really well to the situation.”

The Oilers took the first match with the Lakers’ Ruggeri falling to Zachary Collins at 125. However, the Lakers’ Soriano and Burke both pinned their opponents, and took the lead for the Lakers at 9-3.

The Oilers and the Lakers then traded two matches each, with the Oilers’ Josh and James Wimer over Clark and Kinyua respectively and the Lakers’ Grass and Johnson over Oilers Justin West and Mark Trifelos. Armani Robinson picked up the Oilers’ last win of the day against Konyk, before the Lakers’ Begin and Robb sealed victory for the Lakers.