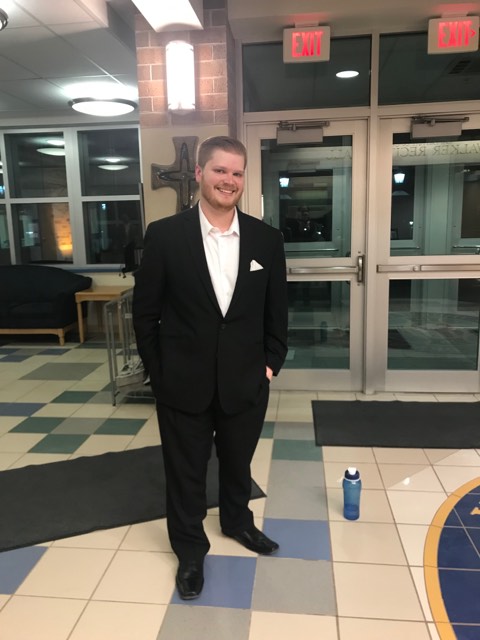 On March 13 at 8 p.m., the D’Angelo Department of Music presented baritone Royce Stryder’s faculty recital in Walker Recital Hall.
Stryder was accompanied by Nathan Hess, D.M.A., on the piano throughout the recital.
The program consisted of songs from six different composers.
Stryder opened the program with a selection of three songs from “Old American Songs” by Aaron Copeland.
Copeland wrote two sets of American songs which are comprised of revamped old folk songs.
The first song of the set, was “Zion’s Walls” and encapsulated its revivalist theme.
“At the River” followed as the next song which was an arrangement of Robert Lowry’s hymn.
The final song, “The Dodger,” was a very quirky, upbeat satirical song and Stryder held true to the song’s tone throughout his performance.
It was a good opener because each movement was stylistically different, showcasing his stylistic range and setting the stage for the rest of the program.
The next song on the program was Liederkreis, Op. 39 by Robert Schumann.
This is a song cycle based on the Joseph Freiherr von Eichendorff poem entitled “Intermezzo.”
Out of the 12 pieces in the song cycle, he performed “In der Fremde,” “Intermezzo,” “Waldesgespräch” and “Die Stille.”
The first song was shorter and full of melancholy.
Since Schumann was a pianist first, he gave the piano its own voice during the songs.
Hess truly showcased this as he and Stryder entered a call and response between the voice and piano.
The songs he chose out of the cycle were gorgeous and dramatic.
The song cycle was followed by Maurice Ravel’s “Don Quichotte a Dulcinee,” which consists of three songs based on Spanish dances.
“Chanson romanesque” is based on the guajira.
The second song was “Chanson epique,” a knight’s prayer to St. Michael, St. George and Madonna of the blue mantle.
Finally, the last song, “Chanson a boire,” was a very lively drinking song.
Stryder pulled out a mini flask before beginning the song and pretended to “secretly” take a swig of alcohol as a way of getting into character.
He did a great job maintaining the drunk persona as he performed this song.
This is the first time in a long time that a prop was used during a faculty recital.
After the intermission, Stryder and Hess performed Poeme d’un jour, Op. 21 by Gabriel Faure.
His French accent was expertly done as he performed each of the songs in this work.
The first was “Rencontre.”
“Toujours” was a very dramatic song and it contained a wonderful crescendo between the piano and voice.
“Adieu” was one of the few songs in the recital that gave me chills.
It seemed to be a fitting closer, so I was a little confused as to why it was not chosen to be the final piece on the program until we reached the final song.
The penultimate song on the program was a portion of Georgy Sviridov’s song cycle “Russia Cast Adrift.”
Each of the songs in the cycle were settings of poems by imaginist poet Sergei Yesenin.
The cycle consisted of four songs that were very full and dramatic and Stryder really got into his performance.
“O Rodina, shchaslivyi i neiskhodnyi chas!” began with a very nice, upbeat piano solo.
Throughout this song, the piano’s solo and melody really stood out and was one of my favorite aspects of the recital.
As voice and piano intertwined throughout this song, it truly showcased each performer’s talent.
The last portion of the recital consisted of a selection of songs from “American Folk Songs” by Steven Mark Kohn.
The very first song, “Wanderin’,” was a very sweet song.
The third song “The Farmer’s Curst Wife” was my favorite and it was the funniest song on the recital.
It was also the “folkiest” of the folk songs.
Stryder truly performed this song as he narrated/sang the story of the poor farmer’s wife.
While this was only the third song out of the five, it deserved, and received, its own round of applause.
“The Ocean Burial” also contained a gorgeous solo piano part as well as a dramatic and well-timed pause between Stryder and Hess.
The recital concluded with the final song, “Hell in Texas,” which was about how the Devil created Hell on Earth which, as the name suggests, is Texas.
This was a dual voice song, so Stryder further demonstrated his skill as he switched between each character as he breathed life into them through his voice.
This opus of American folk songs was a pleasantly surprising twist because they were in English.
Generally, the folk songs in classical literature tend to be foreign folk songs.
Overall, Stryder is an excellent vocalist and truly demonstrated skill and command of the repertoire.
He brought each character to life on the stage.
Stryder performed as if he had been plucked out of a grand opera or musical and placed on the Walker Recital Stage and continued as if nothing happened.
This speaks to his skill as a performer.