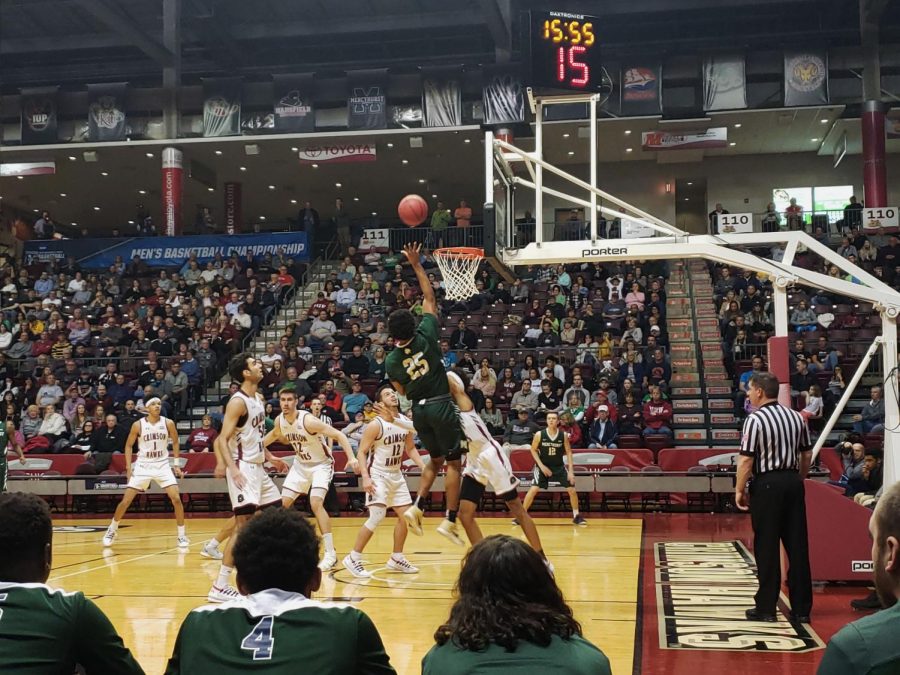 The Lakers’ Jason Massey jumps for a shot against Indiana University of Pennsylvania on March 17.

In a weekend that upended expectations, the Mercyhurst Lakers men’s basketball team finds themselves advancing to the Sweet 16 for the first time in program history.

Said milestone was achieved by a 63-60 overtime victory against Fairmont State, and a 75-65 takedown of PSAC rival Indiana University of Pennsylvania (IUP), the first two games of the Division II tournament.

On Saturday, the Lakers took on Fairmont State University out of Fairmont, WV. The first half was tight, with small leads for both teams, ultimately finishing out with a one point lead for the Lakers.

In the second half, the Lakers found themselves pulling ahead for a bit, only to once again trade leads until a tied 53-53 score at the end of regulation.

Overtime saw the intensity continue between Fairmont and the Lakers, but with less than three minutes remaining, Fairmont lead by five points. Despite this, the Lakers worked the score to a 60-60 tie with a mere 1:06 remaining in overtime.

However, the Lakers’ Patrick Smith sealed the Lakers’ next appearance in the tournament, draining a three pointer with seven seconds remaining and putting the Lakers up 63-60 for the final tally.

The victory lead the Lakers to face Indiana University of Pennsylvania, the venue hosts and the second ranked DII basketball team in the nation.

This contest was the fourth time for the season between the two teams, with the most recent being the PSAC Championship in which IUP staved off the Lakers for a 56-49 victory.

However, with the exception of two points scored in the beginning of the game, the Lakers lead the whole way through. Mercyhurst led at the half 32-23, a slow start for IUP, who could not get out of the first half performance hole. To the point, the second half score was 43-42, Lakers, who would win 75-65.

“To come into this gym and then play the way we played and make the shots and make the stops speaks volumes and I can’t be happier for our guys,” Lakers Head Coach, Gary Manchel said at the post-game presser. “They deserve everything right now.”

Smith lead the Lakers with 20 points, followed closely by Jason Massey with 19. “You go in expecting a 40 minute battle, and that’s what it was,” Smith said. “Our shots were just falling today, which gave us the win.”

The Lakers’ Derrick Ellis proved instrumental in maintaining the Laker lead late in the second half, making seven points from IUP fouls and leading the team in that stat. MiyKah Macintosh also had 12 points, six of which came from free throws.

The victory against IUP leads them next to take on West Liberty University, the No. 5 team in the country. “They (West Liberty) are one of the most resilient teams in Division II that I’ve ever seen,” Manchel said. “They’re never out of it. They’re well coached, they’ve got ridiculous talent.”