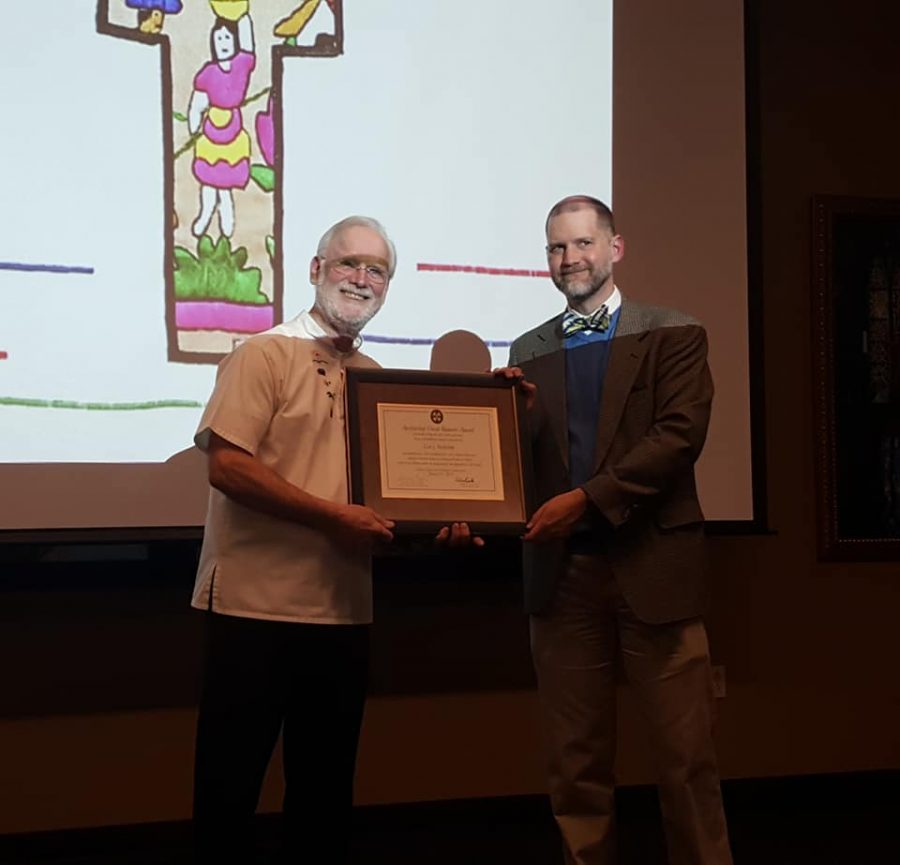 On March 21, Mercyhurst University welcomed Carl J. Malischke to the Mercy Heritage Room, where he was presented with the 28th Oscar Romero Award. This award has been presented by Mercyhurst since 1991 to individuals or organizations who are “living the call of faith and justice in an extraordinary manner.”

Malischke was honored for his humanitarian work in El Salvador. He had worked through his hometown parish in Milwaukee, Wisconsin, for decades as an advocate for refugees in this country. He has helped and influenced countless lives in communities within El Salvador and other Central American regions.
“I am deeply humbled to be standing here to accept this award. I sincerely thank Mercyhurst University for this tremendous honor,” Malischke said during his speech.

Mercyhurst welcomed Malischke with open arms to come and speak about his work in El Salvador to the student body, faculty and Erie natives.
Malischke, reflecting his deeply rooted Catholic faith, spoke about how God led him to serve others in need across the world. His talk was titled “The Impact of Colonialism and War: A History of Poverty, Violence and Migration. How I Was Led to El Salvador, Fell in Love and was Ruined for Life.”

“Whether by accident, fate, coincidence or God’s will, it was an invitation to love and to be loved. An opportunity to be human and bring about a miracle,” Malischke said.

The award is named after Romero, the late Archbishop of San Salvador, El Salvador, who is remembered for his commitment and service to the poor and oppressed in El Salvador. He believed in empowering and protecting the poor. On Oct. 14, Archbishop Romero was canonized a saint in the Roman Catholic Church, making this year’s award special for its recipient. Canonized by Pope Francis, Romero’s Latin American origins and unwavering commitment to social justice led to his martyrdom.

Malischke humbly accepted the award on behalf of those whose lives touched him most.

“I wish to accept this award on behalf of the hundreds of El Salvadorians that I encountered beginning in 1991 when our paths first crossed, and as we continue throughout these many years walking down the road to EMMAUS,” Malischke said.

Not only is EMMAUS a reference to the biblical story of Jesus appearing to the disciples after his resurrection, but for Malischke, it is the acronym for Engaging in Ministry and Missionary Activity United in the Spirit — his personal blog that detailed his travels in El Salvador.

Malischke opened his talk with the biblical story of Bartimaeus, a blind beggar who called out to Jesus for mercy and healing, saying “Master, I want to see.” Malischke related the story of Bartimaeus calling out to Jesus to when he himself cried out to God to show him his path because he, too, wanted to see. As a result, he and his wife, Maureen, serve through their home Milwaukee parish in El Salvador.

Malischke and his family not only serve in El Salvador, but they have also hosted multiple children who wish to study in the United States. A good friend and former colleague of Malischke came to him one day and told him of a Peruvian girl named Mirtha who wanted to study at the University of Wisconsin-Milwaukee and needed a place to live.

The Malischke family opened up their home to not just Mirtha, but also her sister Ruth.

“Thus we gained a daughter, but not just one daughter,” Malischke said. “Love can be most powerful, most present, and most transformational. That is where you and I become most human.”

Throughout the rest of his talk, Malischke recounted the moving stories of many El Salvadorians and the mutual symbiotic impact they have had on each other. He even explained how he had committed a felony by housing an illegal immigrant who was under a court order for immediate deportation.

He has provided transportation for those who journey to the United States to court, ICE, attorneys and immigration court. Relating the modern day back to the Bible, he said Mary and Joseph, too, were asylum seekers. After a hard journey of over 5,000 miles on foot to the United States from Central America, many immigrants seeking asylum end up forced to complete the circle of forced migration. This is forced migration by land from one’s home country and forced deportation by air from the country they hope to be their refuge.