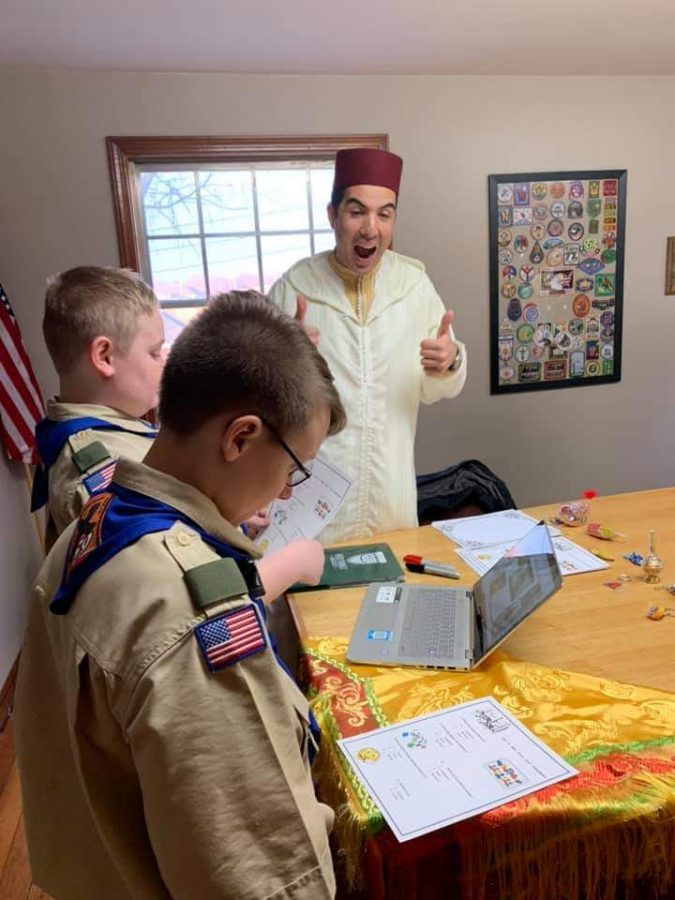 On March 11 a group of lucky boy scouts got the chance to work with Mercyhurst students and faculty to earn their Citizenship of the World Badge. Mercyhurst has joined a national organization called Language in Motion which introduces and supports the study of language and culture in the K-12 classrooms.

Students and faculty will go out to schools and community groups to engage them with language and cultural games and activities.

The first of these events was working with Boy Scout Pack 59, a local scout troop. Russian, Arabic, Spanish and ESL students and faculty visited the group to present on Mexican, Russian, Moroccan and US citizenship information.

Alice Edwards, Ph.D., professor of World Cultures, was the main organizer of the event.

“The Boy Scout troop reached out to us to have some help completing their Citizenship of the World Badge,” Edwards said. “Dr Janelle Newman and her students made a game to show students the complicated process of immigration into the United States. Fulbright scholars Lidiia Novichkova and El Houcine Amouzoun presented Russian and Moroccan citizenship rules, and I led a presentation of Mexican civics with my students.”

As well as these educational presentations, the boy scouts got the chance to try out games and activities at a variety of tables.

Edwards and her students explained the cultural importance of amate paintings, a form of traditional Mexican folk art, which the children then created.

“It was a great event,” Novichkova said. “El Houcine and I had Russian and Morrocan stations. Scouts were to do some activities at each station to win their new badge. At the Russian table there were questions about Russian geography, history and culture. They pointed (or learned and then pointed) where Russia, Moscow and Siberia are on the world map, learned the three longest rivers in Russia and the names of famous Russian inventors and their inventions.”

The event was an example of a “culture lab” activity. The scouts were actively engaged in contrasting how one becomes a citizen in the United States to the path to citizenship rights across the world. The boys also learned the duties and obligations of U.S. citizens.

Janelle Newman, Ph.D., made an simple game where each child got a character card and US Customs and Immigration Service form and was challenged to try and become a naturalized citizen. The boys were aged 10 – 15 and found this to be a difficult challenge.

However, after learning how difficult becoming a citizen of any nation can be, there were also games on hand for some cultural relaxation.

“The blast at the Russian table were the real wooden Russian movable toys which move manually without batteries. The kids were challenged to figure out how those toys worked. They loved it and came back to play with them again and again,” Novichkova said. “They also told El Houcine and I a lot about being Boy Scouts and what they are learning. So it was a cultural exchange going both ways.”