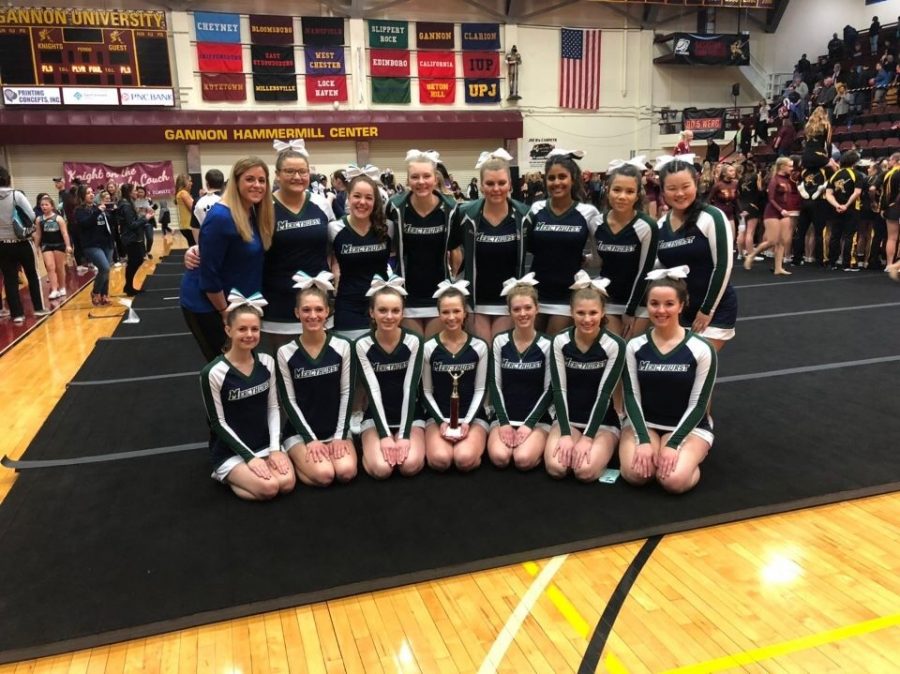 The Mercyhurst Cheerleading team poses after the competition Saturday.

On March 23, the Mercyhurst Cheer Team took part in the Road to Daytona Showcase at Gannon University’s Hammermill Center. Despite this being the first time the Mercyhurst Cheerleaders have competed, the team was awarded second place for their division.

“I’m very proud of them,” Paulina Wielandt, Assistant Director of Mercyhurst AIM program and Head Cheerleading Coach, said. “They really did achieve a lot this year and at the competition. Their hard work and dedication definitely paid off for them.”

Many of the girls on the team had never cheered at a competitive level, but were confident in the team’s abilities and morale. “When I first found out that we were going to be competing, I was really nervous. This was my first cheer competition,” Rachel Ritz, sophomore early childhood/special education major said. “With the encouragement from my teammates and coach, my nervousness became excitement.”

The reality of the competition sank in for the team when the day arrived.  “It was all of a sudden real when we walked into Hammermill,” Emily Kline, junior psychology major, said. “We had been working for it for so long and then it was suddenly something that we were about to do.”

The cheer captains helped to build and choreograph the stunting routine for the competition themselves, taking input from the rest of the team and pushing to try more difficult stunts.
Wielandt was grateful for this help from the girls as well as the music for the routine from Nathan Nitczysk, Academic counselor. The routine included stunts never done by the team before such as an A-frame pyramid into a tick-tock and assisted backflip.

The team was able to practice for a full week before the competition at Erie’s CheerVibe cheerleading gym to work on these skills. The showcase also featured teams from Gannon, Penn State Behrend, Buffalo State, Elmira College and Rochester Institute of Technology.

“Other college teams have choreographers to make their routines and work all year for events like this. We have worked so hard this past month and I cannot believe how lucky I am to have such good teammates,” sophomore sports medicine, pre-physician’s assistant major Alexis Gill said.

Mercyhurst received zero deductions for the execution of their routine. “Being able to compete for the first time in the history of the program was such an honor. It wasn’t easy leading up to the competition but we made it through it,” senior hospitality management major, McKenzie Douglas said.

Ending their season with a competition and the opportunity to travel to the Sweet Sixteen and Elite Eight basketball games to support the men’s basketball team, Wielandt sees this past year as a success.

“We had a wonderful season. Definitely throughout a season you are going to have some different struggles, but we really had a lot of positive opportunities and contributions,” Wielandt said.
The Mercyhurst Cheerleaders hope that the work they put in this season carries on with the program for years to come. “This competition was about getting our names out there for the program,” Kline said. “It shows that we are willing to put in the work and we are willing to compete, especially now that we have our foot in the door.”

The team was thrilled with their debut at the Road to Daytona Showcase and see their accomplishments as the start of many more opportunities to come.

“Our team has come so far this season,” sophomore sports medicine, pre-OT major Sarah Heller said. “There is no one else I’d rather be on the mats with than my teammates. Together, we are making history. This is our beginning.”