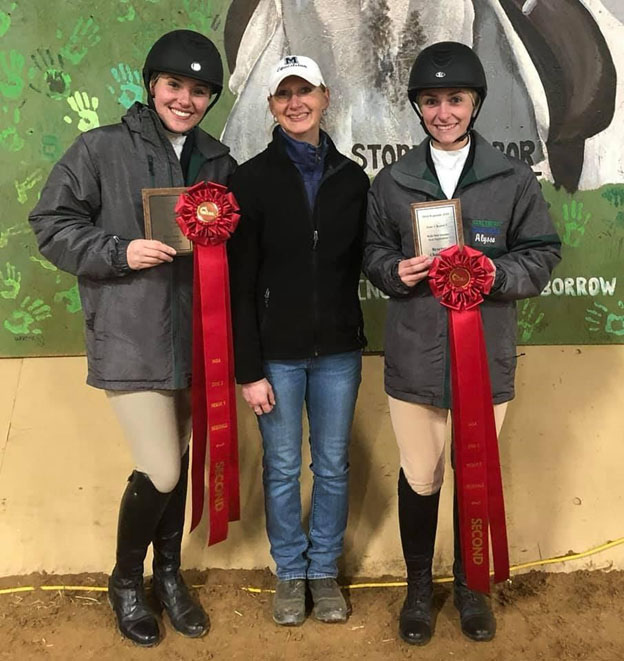 Mercyhurst’s Equestrian team is riding high this season after giving an impressive performance at Regionals. The Equestrian team placed Reserve Champion in one show and was third in the region overall out of 16 teams.

Led by coach Halli Bidwell, the Mercyhurst Equestrian team welcomes both beginners and experienced riders in joining the team.

The team compete within the Intercollegiate Horse Shows Association (IHSA) Zone 2 Region 5 category. The team sent its top riders to Regionals this year and has had three riders qualify for Zones, the last qualifying round before Nationals. Zones will take place in New York City on April 10.

Hunter Reiff, sophomore Early Childhood and Special Education major, has qualified for the Advanced Walk-Trot-Canter category. “I never imagined that I would ride in college, let alone make it to Zones,” Reiff said. “This ride in New York, which could possibly be the last one of the season, is to show my family how grateful I am for everything they have done.”

She will be joined by Alyssa Reedy, who will compete in the Walk-Canter portion. Reedy is a junior Intelligence Studies major. “Joining the team as a beginner horse rider, I’m really excited to have qualified for zones,” Reedy said. “It’s going to be challenging going up against riders from across the whole region, but our team has worked hard all year. I can’t wait to compete in the National qualifiers and represent Mercyhurst.”

The final Zones competitor is Mercyhurst grad student Molly Card, who has qualified for the Alumni Flat contest. The team is captained by Emily Thayer, junior French and Political Science double major.

“The team has really grown in number, talent and general team spirit over the years,” said Thayer. “My freshman year there were six members, and this year we had 11. We have become more competitive, successfully competing against much larger schools such as WVU and Slippery Rock. It has been so exciting supporting my team members as they go to their first shows, point up into higher levels and ride challenging horses. I am really looking forward to next season. It will be amazing to see the team’s motivation and talent come together for another successful year.”

Reiff shares similar sentiments and feels hopeful about her next ride. “In all honesty, this is the best I’ve probably ever ridden, and it wouldn’t be possible without the support and encouragement my mom and grandma give me,” Reiff said. “They wake up at the crack of dawn and drive countless hours every season just to see me ride for maybe 10 minutes. This season has made me realize that my family is my greatest blessing, and the success has just been an added bonus. I look forward to the next part of this season in New York.”