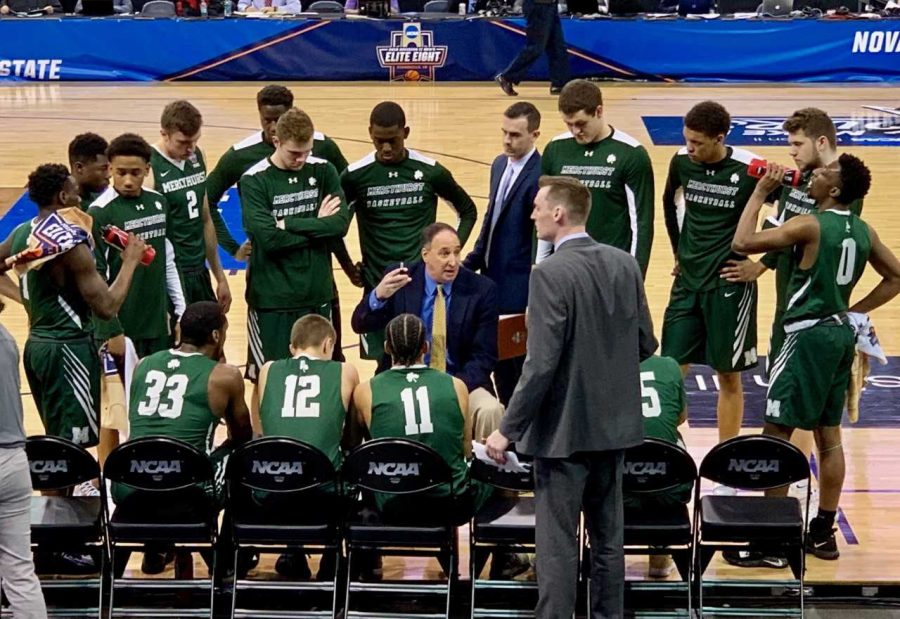 The trailblazing journey of the Mercyhurst Lakers’ 2018-19 men’s basketball team came to an end March 27, with a 55-51 Elite 8 game loss to the Northwest Missouri State Bearcats at the Ford Center in Evansville, Indiana.

“It’s not fun to lose,” Head Coach Gary Manchel said at the post-game news conference. “But the way we played, there’s nothing to hang our heads about.”

The Bearcats, who came into the game undefeated and ranked No. 1 in the country, would go on to best St. Anselm College 76-53 in the Final Four and Point Loma University 64-56 in the championship game to end a 38-0 season. “Going into the game we didn’t have to question how good they were,” the Lakers’ Jason Massey said. “They had won every game and had a 96-5 record the past three seasons. As a team we know what we had to do was limit their three-point opportunities as most of the team shot over 40 percent and get them in foul trouble as they only played six guys. Personally and really our whole team, too, I felt it was important to provide consistent offense. Sometimes in arenas like that it’s hard to get a flow.”

Indeed, it was a slow-scoring game for both teams, as neither team cracked 10 points until almost 12 minutes into the game. At the end of the first half, the game was nearly even, save for a buzzer-beating layup that put the Bearcats up 24-22.

Overall, the low score was a testament to both teams being known for their strong defenses, though the Bearcats were able to open up a scoring run in the second half that peaked their lead to 11 points.

“I’m betting they were in the lead for probably 35-37 of the 40 minutes,” Massey said. “And even though it was close, us kind of having to play from behind makes it tougher against a really good team. We had solid leads versus both IUP and West Liberty and that gave us the leeway to run away with those games.”

The Lakers would not go quietly from the Ford Center, as they battled fiercely to keep their run alive, cutting the gap to three points with a minute on the clock. Unfortunately, a series of three fouls called on the Lakers within a matter of seconds spoiled the hope for a comeback, and the Bearcats were able to hit the freethrows they needed to secure their victory. A late three-pointer by the Lakers’ Derrick Ellis made the 51-55 final tally.

Massey led the Lakers in points with 17, followed by Ellis and Zach McIntire with eight apiece and Patrick Smith and Trystan Pratapas each putting six points on the board.

For Massey and Smith, this was their last game playing at the collegiate level. Despite the outcome of the game, it would be hard to say that this hasn’t been the season that a player would want as their last.

“My last reflection would be that it really was a great year as a team. … And I guess it’s cool to think what we did will be remembered in Mercyhurst sports for a long time,” Massey said. “In high school, my team and I were fortunate enough to win the first boy’s basketball state championship in school history my senior year and now in my last year of college, this team was able to win the first regional championship and go to the first Elite 8 in the school’s history. So I’ll always remember that.”