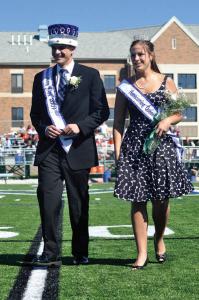 While waiting for half-time, the Homecoming Court candidates were treated like royalty because they were given cookies, drinks, flowers and a side line view of the football game.

At half-time, candidates were introduced and escorted to the middle of the football field where they were each given a blue box to open.

“I was definitely surprised. I really did not campaign so the result is interesting to me,” Shoemaker, an Intelligence Studies major, said.

Tompkins, a Secondary Education and Math major, said she was ecstatic when she saw the white balloon. “There were fireworks exploding in my stomach,” she said.

Tompkins said winning Queen was very meaningful to her. “It’s a real honor. All of those girls up there were great,” she said.

This was Tompkins’ first Homecoming Queen title, though she was on her senior prom court in high school.

Also a first-time Homecoming King, Shoemaker offered some advice for those who want to be on Homecoming court in future years.

“Just be who you normally are, don’t pretend to be otherwise,” he said.

In accordance with Mercyhurst Homecoming tradition, Tompkins and Shoemaker are expected to return during Homecoming weekend next year to crown the 2010 King and Queen.