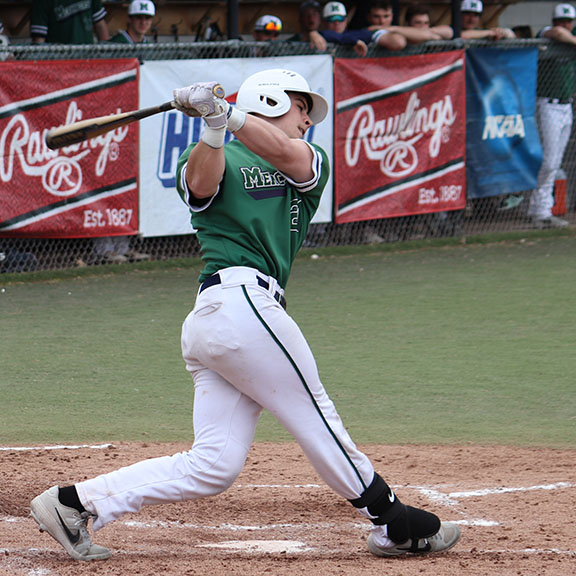 Mercyhurst entered the day having swept the Crimson Hawks on their home turf Saturday in two close-fought games. Prior to the weekend’s home and home doubleheaders, the Lakers were ranked No. 1 in the NCAA DII Atlantic Region Poll.

“I prefer not to be ranked in those polls and stuff,” Head Coach Joe Spano said. “The only things that really matters to me is that you know we’re ranked when it counts like for the NCAAs and things like that. But it is nice for recruiting.”

Starting off the day was a 10-3 rout over the Crimson Hawks in the first game of a twin bill. Laker pitcher Tyler Garbee allowed a solo home run by the Crimson Hawks’ Markus Cesta, but that was all.

During the Lakers’ half of the first, they scored five times as 10 men stepped to the plate and Matt Schneider, Hunter Snyder and Josh Surowiec plated three runs. The Lakers’ offense kept on producing in the bottom of second with an Alex O’Donnell single and a Schneider two-run homer to extend their lead to 7-1.

In the fourth inning, Garbee got the first two Crimson Hawks, then yielded a walk to Luke Hollander but managed to get out of it by getting him at first base with an unbelievable pick off move.
The fifth was Garbee’s last inning on the mound, which started promising. However, he walked a batter after getting two outs, then the Crimson Hawks’ Chris Eisel clobbered a ball beyond the fence to cut into the deficit.

But two innings prior the Lakers batters were clinging on all cylinders again when Surowiec led off the third with a solo shot and outfielder Kenny Robinson scored on a sacrifice fly off the bat of Jack Elliott. An inning later, Matt Gibson connected with a solo homer, the third homer of the game for the Lakers, to give them a 10-3 lead. The Lakers’ offense went quiet for the rest of the first game, but Mercyhurst’s relief pitching was superb with Laker Ryan Smerkar followed by relief pitcher Tyler Passmore to get the last three outs in the top of the seventh.

In the second game of the twin bill, Coach Spano handed the baseball to senior Russell Lamovec. Unfortunately, Lamovec had an off day on the mound, and although he finished the inning, the Crimson Hawks scored seven runs.

During the Lakers chance at the plate the Crimson Hawks’ Tyler Adams retired the first two batters, but there were two runs from loaded base walks. With the score at 7-2 in the bottom of the first, the Lakers were unable to cut the deficit.

Lamovec then found his groove after the rocky start when he retired nine Crimson Hawks in a row but following a two-out single and walk, Jared Kapturasky entered the game for the fourths end.
Kapturasky made the situation scarier when he walked the first batter he faced but bounced back with striking out the Crimson Hawks’ Austin Vigolitti.

During the bottom half of the frame, the Lakers tacked on a third run when Zach Mitchell was hit by the pitch, then Elliott doubled, and O’Donnell hit a sacrifice fly to center to drive in Mitchell.
The Lakers could have done more damage, but Crimson Hawk reliever Mike Klingensmith got Schneider to pop out to second. Kapturasky entered the top of the fifth getting the lead off man but yielding two consecutive walks.

Lucas Folmar then came in for the Lakers with runners on first and second, one with one out, and produced a fly out and a pop out to end the Crimson Hawk threat. The Crimson Hawk’s Klingensmith then retired the next three Lakers in the fifth. Folmar entered the top of the seventh, but the Crimson Hawks had other ideas as Colin Williams led off the inning with a walk; then Folmar was able to eliminate Nick DiAndreth but another pitching change was in order.

Nevertheless, the Lakers won three out of four in the series. “It’s always a positive thing to win a series in our conference,” Spano said. “It is a really difficult thing to do. Every team in our division is really talented this year and you always want to win as many games as you can but we’re always happy to win a conference series.”

The Lakers, now tied for No. 1 in the division, will be back at the Mercyhurst Baseball Field April 13 vs. Seton Hill University.