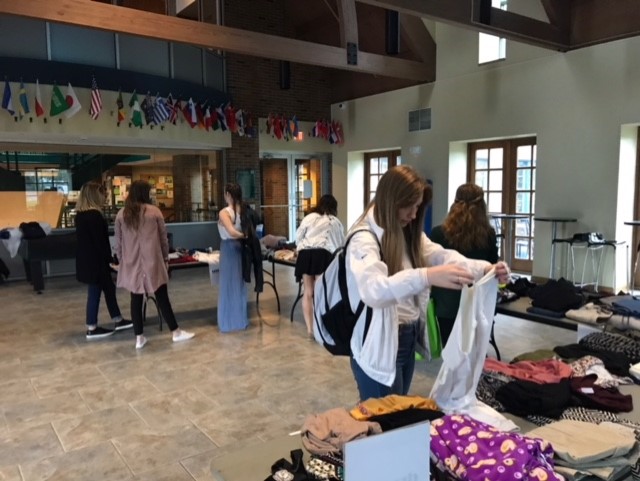 Out with the old and in with the new. That was the theme behind the Fashion Council’s recent Spring Clothing Swap.

From 2 to 5 p.m. on April 23, students had the opportunity to bring gently worn clothing to the Student Union Great Room and shop others’ donations.

A first of its kind, the event was designed by junior Caitlyn Lechene, a junior Fashion Merchandising major and Sustainability minor, as part of her Responding to Climate Change course.
“I was tasked with completing a project that can help address the problems of climate change,” Lechene said. “The fashion industry is the second most polluting industry after oil, so there are many issues that need to be addressed. Sustainability in fashion is also a big trend currently because people are realizing how harmful the industry truly is.”

She came up with the idea hoping that instead of throwing out garments, students would be willing to trade clothing pieces, giving them the opportunity to freshen up their wardrobe without having to make additional purchases.

“So many people throw away old clothes instead of donating or finding a new use for them,” freshman Sarah Fertal, a Fashion Merchandising major and Fashion Council member, said. “Clothing swaps give people the opportunity to ‘shop’ for something new, while giving their unworn pieces a new life. This extends the lifespan of clothing and reduces landfills over time.”

Lechene began planning the event in January, however realizing the scope and size of this event, she solicited the help of the Fashion Council to advertise the clothing swap.

Members of the Fashion Council greeted attendees, took their donations and directed them to tables set up throughout the room, featuring clothing for every style, size and season. Shoppers were encouraged to take any items they please.

“I had a great experience because everything at the event was very organized, such as size and type of clothing, and the girls who were supervising were very helpful and welcoming,” sophomore Davia Ford, sophomore Dance major, said.

Ford, like many others, walked away with a number of pieces for the upcoming spring season.
“I am very happy with my new items,” Ford said. “I was able to find some really nice clothes that were my style and size.”

Fertal shared a similar experience: “I brought some clothes that I don’t often wear and swapped them for other pieces. I got some really awesome pieces at the swap, some that even had tags!”

Not only did students benefit with a new wardrobe, but their impact on the environment and wider Erie community was also a positive.

“The benefit of this event is that it helps those who participate reduce their waste from clothes by not throwing away their old clothes and not buying new clothes when expanding their wardrobe,” Shannon Gotham, freshman Fashion Merchandising major, said. “It also helps local charities because any clothes that were not swapped by the end went to a local women’s shelter.”

After the event, 130 pieces of leftover clothing were donated to the Mercy Center for Women.

With such positive feedback from the event, Lechene and other Fashion Council members hope it becomes tradition.

“It is definitely a good starting point for Fashion Council next year to take over and make it better,” Lechene said. “There are many people who want to continue this tradition and to possibly have the clothing swap two times in the school year.”

Ford is excited about the prospect of attending a similar event in the future. “I would definitely attend an event like this again because I had a great experience,” Ford said.