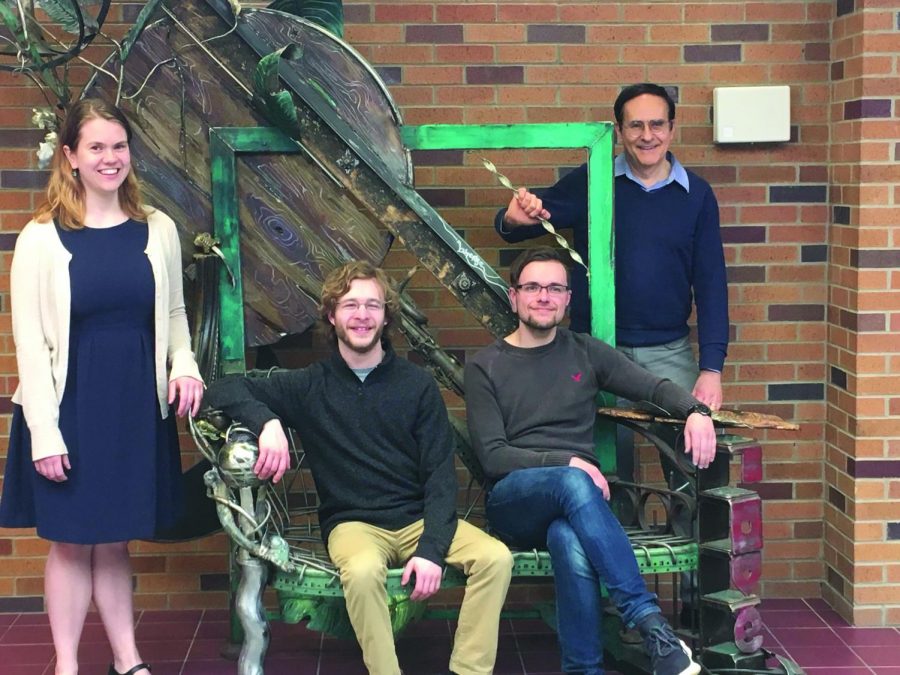 If you are looking for a way to destress before finals and want to see some Mercyhurst University students showcase their talent, then look no further.
The Mercyhurst Student Composers Concert and the Senior Recitals of Christian Goulione and Josh Phillips are happening in a joint concert May 5 at 2 p.m.
This concert will feature the compositions of three Mercyhurst Composition Students: Goulione, Phillips and Mariana Mathewson.
These students are all members of the studio of Albert Glinsky, Ph.D.
Glinsky says that in order to be a classical composer, you must have something to say musically, as well as be able to read music and write for all instruments.
The students said there are several different ways to write music, whether that means starting with an idea, form or a blank slate.
Goulione, a senior, will be graduating in May with a Bachelor of Music degree in Composition.
His four-song song cycle, “Fishing for Stars,” will be performed at the concert.
His other works that will be performed are a brass quintet, a piano trio called “the Rain Trio” featuring a clarinet, cello and piano, two movements of a standard piano trio and two movements of a piano quintet.
After graduating, Goulione plans on coming back to study with Glinsky for another year.
Phillips is a senior Music Therapy major with a concentration in Classical Guitar and Composition and a minor in Psychology.
After he graduates in May, he will be doing an internship with Harborcreek Youth Services.
After the internship, he hopes to go teach in Japan for a year or two.
Four of his pieces will be performed in this concert.
The first piece will be a theme and variations on piano.
The second piece is a solo piano piece, written for an assignment he was given in a music therapy class.
The third piece is a string quartet that is “based on 1950s-1960s monster movies,” Philips said.
The fourth piece is an art song based off of a Japanese poem about whaling in Japan and memorial services for whales killed on whale hunts.
Mathewson graduated from Mercyhurst University in May 2018.
Her degree is in Music Education with concentrations in Composition and Cello.
She also minored in French.
She will be attending Northwestern University for a Master’s in Music Education this fall.
Her first piece that will be performed is her Woodwind Quintet no.1.
This piece was inspired by the time Mathewson spent in France and Spain during her study abroad.
The first movement is based off of a folk tune she heard on a Spanish bagpipe while in Spain.
The second movement is about somebody wandering into the unknown.
The third movement is fun movement about happy memories.
Her second piece being performed is a percussion piece called “Mechanic’s Chorus.”
It sounds like a car repair shop, where mechanics can be malicious.
Glinsky said that the Student Composers Concert is an annual performance because students are composing all year round.
This concert showcases their completed compositions.
Glinsky also said that this concert is different then most that you will see because it features original works from the students, and many of the pieces on the concert are world premiers.
It is also different then most because of the amount of “furniture moving,” Glinsky said.
Instead of grouping the compositions in order by instrumentation, they are put in the order that offers the most variety.
This concert features student and faculty performers, as well as guest artists, all in one concert.
Glinsky said his students “have done wonderful work this semester” and he is very proud of them.
This concert is sure to be an entertaining one.