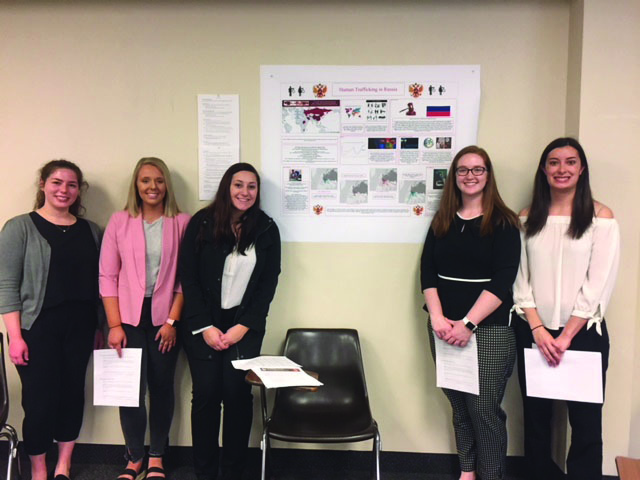 On April 30, Sociology 350 Human Trafficking students presented on one of the world’s most salient modern crime epidemics in their human trafficking awareness projects.

Taught by assistant professor Nicole John-Danzell, Ph.D., this course examines the main concepts and theories of human trafficking, the influence of social inequalities, scope and magnitude of the trafficking business and initiatives to solve these issues.

This information culminated in a poster and verbal group presentation with the class’s 30 students divided into six groups.

“I selected this project because I believed there was great utility for students given their mix in disciplines: sociology, social work, political science, public health, intelligence, etc.,” John-Danzell said. “I want my students to be instrumental in the discourse on the issue of human trafficking and become agents of change.”

With sex trafficking as the second largest crime enterprise in the world, human trafficking is recognized as a global issue. Bearing this in mind, students were given the opportunity to select a geographic location to research in greater depth.

“For our final project we researched sex and labor trafficking in Southeast Asia,” freshman dance major Katie Lowell said. “We learned about what happens and what can be done about it.”
For some students, a personal connection made this presentation especially interesting.

“I picked Haiti because I traveled there with the Mercyhurst Public Health Department in May of 2017,” senior psychology major Julia Raymond said.

Fellow group member Zach Davis discussed the nature and scope of trafficking in the Caribbean and Latin America.

“Sex tourism is extremely prominent in this area,” Davis said. “It’s known as the world leader because people will fly in and have a girlfriend for a week. It’s more prestigious than prostitution and it’s becoming popular with underage children.”

Other areas of focus included Russia, Mexico, Colombia, China and even the United States.

Senior criminal justice major Austin Roache, who was a member of the group focusing on the United States, found it interesting that trafficking can be influenced by more than just humans.
“Borders have a huge role,” Roache said. “Children will come across the borders and have their documents taken, which prevents them from returning home. I think we need stricter check points beyond checking documents, because also checking relationships is key.”

Not only did students in the class increase their knowledge on human trafficking, but other members of the Mercyhurst community who were invited to attend. John-Danzell opened the presentations to the public, hoping that it would allow students to have a greater understanding of the diversity of human trafficking.

With posters spread out around the room, guests had the ability to learn about each location, with group members stationed nearby to talk about their research and answer any questions.
“Anyone can be a victim of human trafficking,” John-Danzell said. “It is a growing problem and affects each of us within this global community.”

Attendees not only had the opportunity to learn about the issue, but also their role as consumers in furthering businesses commonly associated with human trafficking: seafood products made by trafficking victims in Thailand, chocolate, carpets, rugs and clothing produced unethically and by child exploited labor.

“Those who attended gained some exposure to causal factors of this issue and possible solutions to mitigate or confront the problem, such as those purported by anti-trafficking institutions and activists, educators, NGOs or by consumer habits,” John-Danzell said. “I hope with this knowledge, it can help us become better ethical consumers and more vigilant global citizens, which are potential steps in punctuating the problem.”