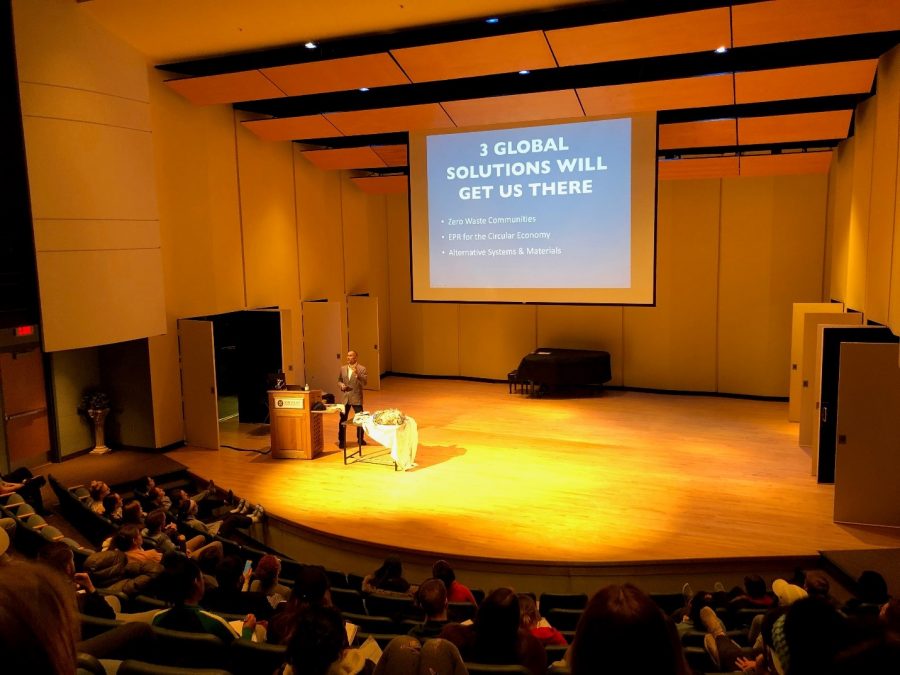 The event featured co-founder and Director of Research for the 5 Gyres Institute, Marcus Erikson.

Erikson talked about how he became interested in sustainability through collecting enough plastic water bottles to build a raft.

Working with a team of other sustainability enthusiasts, including his now wife, Erikson used more than 15,000 plastic bottles to create a raft that would transport a group of people. The raft took the group on a three-month trip from the coast of Los Angeles to Hawaii, and is now on display in Long Beach, California. This was just the start of Erikson’s career in sustainability.

Erikson did an expedition throughout the North Atlantic Gyre with a group of people from the 5 Gyres Institute to analyze the amount of plastic in that gyre.

Examples of plastics they found include bottle caps, mouthpieces and even a plastic bucket with a triggerfish trapped inside.

However, most plastic pieces recovered from this trip were found on the bottom of the sea and inside the animals that lived there.

The group fished for food and found small pieces of plastic inside the fish they were eating, harming both animals and humans. Additionally, most plastic was between the size of microfibers and a grain of rice, allowing them to be transported through both the water and air, spreading to the wildlife on land.

Erikson brought examples of plastics that he found over several expeditions.

During one on land, he came across the skeleton of a camel in the sand. During the digging process to uncover the rest of the skeleton, Erikson found a large plastic mass in the camel’s stomach. It was about three feet long, one and a half feet wide, and six inches tall — to put into perspective, it was the size of a memory foam pillow or the size of a small duffel bag. Erikson used examples to show the impact of the amount of plastics that we use to demonstrate the harm it causes to animals and humans.

Throughout his presentation, Erikson used numerous statistics to show how the amount of plastic we have used has changed over time.

As of today, it is estimated that more than 8.3 billion tons of plastic has been made throughout history.

However, Erikson provided the audience with three solutions that will have a strong global impact on the environment: building Zero Waste Communities that focus on the diversion of waste from landfills and turning it into resources, Extended Producer Responsibility (EPR) for a circular economy, starting with the manufacturer and working through the business cycle to the consumer and, finally, using alternative systems and materials, for example, reusable cups for fast food restaurants.

Erikson ended his presentation encouraging those who attended the event to consider how they can change their routines to become more sustainable. Showing a video called “Sea Change,” he demonstrated what he meant and what we could do to change the environment around us for the better.