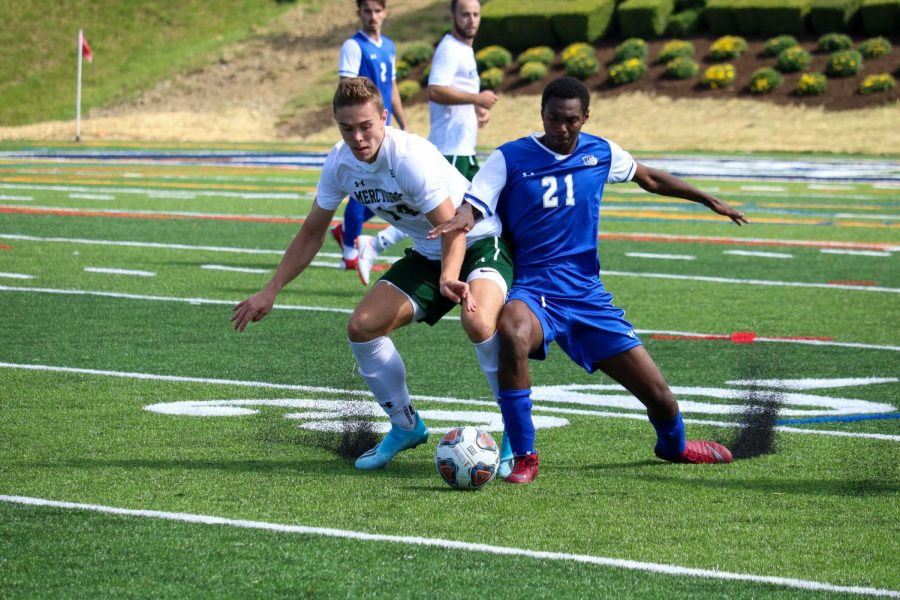 The Lakers’ Henri Tophoven battles Urbana Unversity’s Cory Carr for control of the ball during Thursday’s home opener. Currently, the Lakers are 1-0-1 after tying Urbana and besting Ohio Dominican University.

On Sept. 5, the Mercyhurst Men’s soccer team faced a day of firsts: hosting their first game of the season, playing for the first time on the brand new Saxon Stadium field, and facing the Urbana University Blue Knights for the first time since 2016.

At 39:59 though, the Blue Knights’ Hass Gorji scored, resulting in the total score 2-1 Urbana at half-time. In the first half, both teams played offensively with the Lakers having five shots on goal in while the Knight’s took four shots on goal. Three-minutes before halftime, Mercyhurst’s Connor Wilkinson received a yellow card.

81 minutes in, Urbana’s Alex Drenski received a yellow card and the Lakers came out strong in response. The Lakers’ own Castel placed the ball into the left upper 90 off of a direct free kick, bringing the score back to a 2-2 tie in the 82 minute.

In the 88 minute of the game, the Blue Knights’ Gorji was also given a yellow card for foul play and a foul mouth.
Playing aggressively, the Lakers dominated the on-goal shots in the second half with six shots fired in comparison to the Blue Knight’s two on goal shots.

Going into overtime, both teams cracked down on defense in the first 10 minute period with no shots on either goal.
In the second overtime the Lakers shot once while the Blue Knights managed to fire off three shots but could not seem to find the back of the net.

Castel led the team with four attempted shots, one assist and one goal, followed by Harris with three shots and one goal. Sophomore Henri Tophoven also had four shots on goal.

However, even with the aggressive play of both teams, 13 fouls and three yellow cards, including both ten-minute overtimes, the game ultimately ended in a 2-2 tie.

Rounding out the weekend, the Lakers picked up their first win of the season against Ohio Dominican University.
The game, played in Columbus, OH, resulted in a 2-1 victory for the Lakers. The Lakers’ Wilkinson accounted for both goals, with assists coming from Gustavo Requijo and Tophoven.

In their next contest the Lakers will travel to Washington, D.C. on Sept. 14. The Lakers will be facing off against the University of the District of Columbia Firebirds (1-1).