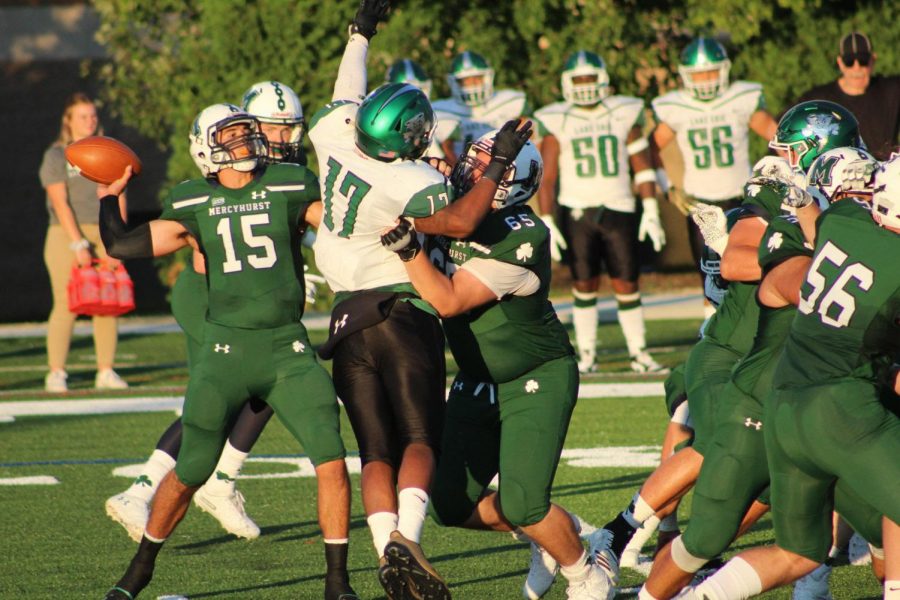 Laker quarterback No. 15 Doug Altavilla looks to throw as No. 65 offensive linebacker Aaron Smith grapples Lake Erie’s No. 17 TJ Flowers. Staving off a comeback, the Lakers won 21-16 over Lake Erie.

On Sept. 5, the Mercyhurst University Lakers kicked off the 2019-2020 football season with a 21-16 victory over the Lake Erie College Storm. “As a team, there are details that need to be cleaned up as we begin PSAC play this upcoming week,” Laker quarterback Doug Altavilla said. “Our defense played well in my opinion, while the offense played a productive first half.”The contest was the first of the season for both teams, and this game was a great way to get the Lakers their first win of the season.

It was also the first game for the Lakers at the newly renovated Saxon Stadium, as well as the first night game, thanks to renovations that took place over the summer.

In the first half of the game the Lakers came flying out the gate up 21-3. Scoring first was redshirt junior running back Garrett Owens who took it to the house on a 17 yard run for a touchdown with 7:20 in the first quarter.

Responding to the Lakers, the Storm made a 26 yard field goal to cut the lead to four points with 4:02 remaining in the first quarter of play. In the second quarter, Owens, who finished the game with 117 rushing yards, scored on a 12 yard rushing touchdown to make it 14-3 with 6:36 on the clock.

However, the Lakers were not satisfied, and with 40 seconds remaining in the first half the Lakers capitalized again with a fumble recovery by wide receiver Austin Hence for another Laker touchdown. From this, the Lakers went into halftime, leading comfortably with the score at 21-3.

The Lakers, at this point, had to feel extremely confident in how the game would go moving forward, considering their dominance on both sides of the ball. In the second half, the Storm attempted to make comeback. Down 21-3 with about two minutes left in the third quarter the Storm responded with 36 yard touchdown to cut the lead 21-10.

In the fourth quarter, the Storm put all of their energy into trying to tie the game. The Storm nearly made it happen, with a touchdown pass from 26 yards to move closer to tying the game with 2:34 to go. However, the Lakers weathered the Storm, who attempted to go for two, but were unsuccessful on the play. Upon victory, the Lakers pounded their chests into the night and walked out of Saxon Stadium victorious.

Next Saturday at 3 p.m., the Lakers will host the Shepherd University Rams at Saxon Stadium. The last time both teams faced each other was December 4, 2010 in which the Rams defeated the Lakers 49-14.

“We are working this week to clean some things,” Altavilla said. “As we know we will need a full 60 minute elite performance on all sides of the ball in order to defeat Shepherd, who’s coming off a close loss in their opener.”