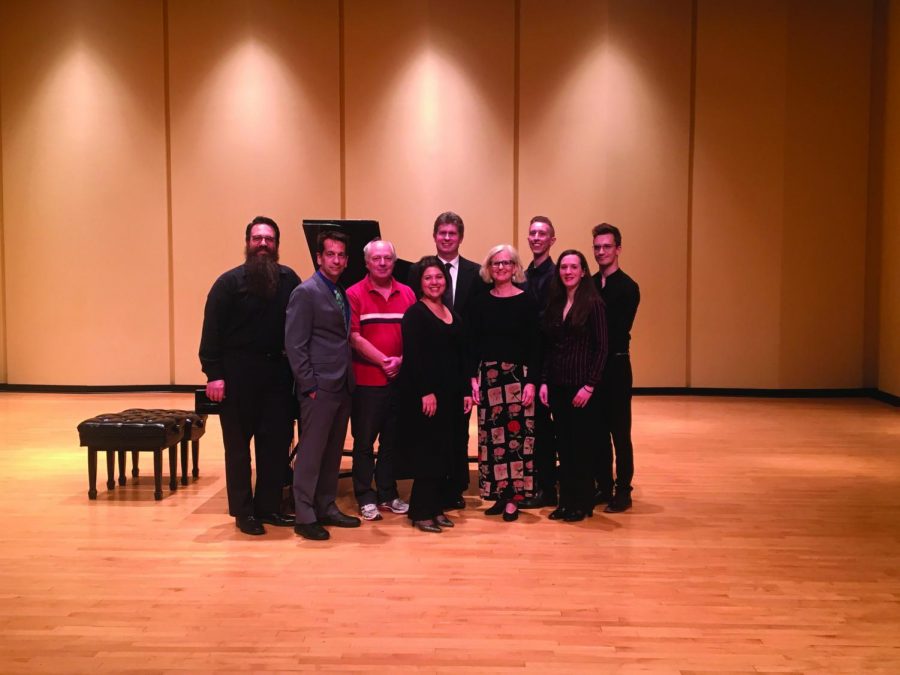 On Sept. 4, faculty members of the Mercyhurst University D’Angelo Department of Music performed in a faculty collage at the Walker Recital Hall.
The selections performed included those ranging in style from classical to contemporary.
The recital featured the talents of Peter Ayuso, Nathan Barber, Kellen Degnan, Elizabeth Etter, D. M. A., Nathan Hess, D. M. A., Jonathan Moser, Mary Moser, Jonathan Nolan, Royce Strider and Rebecca Wunch.
The first piece, the first movement of Ludwig van Beethoven’s Trio in B-Flat Major, Op. 11, was performed by Wunch on the clarinet, Degnan on the cello and Hess on the piano.
This was a great introductory piece as it was fast paced and had a cheerful tone that welcomed the audience and kept them entertained.
The second piece on the program was “Thus Saith the Lord… But who may abide the day of His coming,” from George Frideric Handel’s Messiah, performed by baritone Strider and Etter on the piano.
The piece, though quite dark in tone, was very powerful.
Both piano and voice filled the hall, and Strider’s clear articulation held the audience at attention for the duration of the performance.
Next, were two selections performed by Nolan on the guitar.
The first, Vals, Op. 8, No. 3, was an entrancing piece by Agustín Barrios Mangore.
The second, Recuerdos de la Alhambra by Francisco Tárrega, was exceptional in that it sounded like two guitars playing while, in reality, it was only one.
The guitar was a refreshing change from the instruments audiences normally associate with classical music.
Both pieces reminded one of lullabies with their soft, smooth melodies, but they stood out as they had very intricate moments that immersed the audience.
The fifth performance was Ghost Waltzes No. 1 and No. 2, which were composed by Barber and performed by Hess on the piano.
In his program notes, Barber emphasized the complimentary nature of these contemporary pieces to one another.
As “spouses,” the two pieces worked together to tell a haunting yet sentimental story through changes in tempo and rhythm.
The composition and performance of the piece were both excellent.
Next was Quartet in G Minor, Op. 10, movements I and II by Claude Debussy, performed by a string quartet made up of Jonathan and Mary Moser on violin, Ayuso on viola and Degnan on cello.
This impressionistic piece was very enjoyable due to the energy and physical movement of the performers, which seemed to be used as a form of communication with both one another and the audience.
The final piece of the program was Wolfgang Amadeus Mozart’s Sonata in B-Flat Major, K. 358, performed by Hess and Etter on piano.
This piece was especially entertaining to watch as there were four hands playing one piano.
The special attention to the hand choreography was evident in the fluidity of the performance.
This, plus the lighthearted, fast pacing of the song itself, created an enjoyable experience and was the perfect way to say goodbye to the audience at the end of the evening.
Each piece provided entertainment for the audience.
The variety of selections from various musical eras kept the audience engaged and excited to hear the next piece.
If you did not get to experience this exceptional performance, be sure to attend the music department’s upcoming events, which include Roche Guest Artist Series performances on Sept. 16 and Oct. 7, the Mercyhurst Civic Orchestra concert on Oct. 6 and the next event in the Faculty Recital Series, which features flautist Amanda Sage on Oct. 16.