Mercyhurst College officially submitted the application for university status in November 2010 with the expectation that the 2011-12 school year would begin with the introduction of Mercyhurst University.

With the school year already back in session, Mercyhurst did not see the expected change and may not until March 2012.

“The college properly submitted the documents, but the political changes in Harrisburg resulted in a delay of them reading it and getting a team together,” said Vice President of Academic Affairs Phil Belfiore, Ph.D. 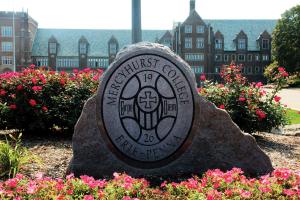 Jill Barrile photo: After submitting an application in November 2010, Mercyhurst is expected to attain university status by March 2012.

The college heard back from the Pennsylvania Department of Education (PDE) in May and spent the summer making corrections to its application, which was over 200 pages.

“All through the summer we finished two addendums,” said Belfiore. “Those addendum’s revised the document so that the PDE is now ready to form a team to come.”

The site team is a group of higher education professionals with experience in various areas of the university structure, including graduate and undergraduate education, finance and facilities, library and technology and student services. The team will also include a team chair and PDE representative.

“We requested the team chair, who will be JoAnne Boyle from Seton Hill University, but PDE chose the rest of the team,” Belfiore said.

From Oct. 3-5, President Thomas Gamble, Ph.D., will welcome the team, present the application and represent the institution throughout the team’s stay. The team will spend one day at the North East and main campuses and present its findings to the administration prior to its departure.

“They will be given college catalogs from Erie, the graduate school and North East, faculty handbooks for Erie and North East, financial records, board minutes and research conducted by the college,” Belfiore said.

“Depending on what happens during their visit, there is a process that goes on in Harrisburg before Mercyhurst will be officially granted that status,” Belfiore said.

Assuming the approval for university status, the changes that will take place in terms of operation will not affect the day to day work of the school.

“We are now structuring ourselves to look more like we really are,” Belfiore said. “We’ve always had an associate’s college, graduate programs and a very strong baccalaureate college. Now we’re just recognizing the fact that these three groups are somewhat autonomous.”

The college will begin introducing a graduate school student government, which will also have its place on the board, and the College Board will be renamed the University Board.

If all things go according to plan, Belfoire expects university status will be granted by March 2012.

“We anticipate that it will go well,” Belfiore said.

The college timeline calls for the official implementation of the ‘university’ name to take place June 1, which calls to question whether the class of 2012 would really be the first graduating class of Mercyhurst University.

“If we are granted university status in March, I don’t see why not,” said Belfiore. “I think it’s something that the student government should bring to the board meeting in September. If there are concerns, we are going to do everything we can to address whatever those concerns are.”

Director of Marketing and Public Relations Meghan Corbin said it is possible for the class of 2012 to graduate from Mercyhurst University.

“Though we are hopeful we will receive university designation in time to grant the class of 2012 university diplomas, it is too premature to officially announce that it is certain,” said Corbin.

“If we receive university designation prior to early March, which will allow enough time for ordering diplomas and planning for the change, it is feasible that the class of 2012 will graduate from Mercyhurst University.”

Gamble told The Merciad early in September, “It’s very possible… that you will graduate from Mercyhurst University.”

When asked about the possibility of being the first class of the university, senior EJ Klawender was excited.

“It’s something that makes your résumé look better,” Klawender said. “I’ll probably be upset if we’re not the first, but I’ll call and get my diploma updated if that’s the case.”

The college has announced that it will release additional information in the spring regarding how alumni can receive a Mercyhurst University diploma.

University status updates can be found on the “Application for University Status” page on the portal.