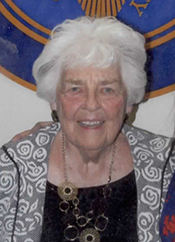 On Aug. 28, the beloved Patricia Anne Yahn passed away peacefully at her home surrounded by loved ones at 91 years old.
Born in Erie, Pennsylvania to the late Michael and Lauretta Prosser Sontheimer on June 7, 1928, Yahn lived a life full of adventure with the love of her life, her late husband Walter Johnson Yahn.
The two met as teenagers and were married for 66 years until his death in 2016.
Avid travelers, they explored Europe, the Baltic States, Scandinavia, Japan, China, Bangkok, Thailand, Russia, the Caribbean and Mexico, as well as most of the United States and Africa.
Wherever they traveled, Yahn never forgot to take her sketch pad and camera to continue her art as they traveled.
An adventurer at heart, Yahn was a passenger on the Orient Express, the Queen Mary, and the Concord.
She even took a submarine ride into the Cayman Trench and traveled to Alaska to participate in dog sledding in her late 60s.
As a student at Mercyhurst College, Yahn studied under the late Sister Angelica Cummings, the founder of Mercyhurst’s art program.
After college, she worked in the advertising departments at Trask’s department store and later the Boston Store.
As a commercial artist, she hand drew life-size sketches of the models wearing the store’s clothes to appear in the paper before photography became popular.
Later on, Yahn became involved with the Junior League of Erie and served as its president from 1968-1970.
She designed scenery and advertisements for their annual plays, dances and Santa’s Castle Scenery.
While in the Junior League, she helped to raise funds for the construction of the Erie Planetarium, now the Yahn Planetarium at Penn State Behrend.
Throughout the 70s, she served on numerous boards, such as the Hamot Hospital Board, Wayside Church Board and Commonwealth Board of the Medical College of Pennsylvania.
She also served as President of the Millcreek School Board.
Yahn was also an active member for over thirty years in the Carrie T. Garden Club and served as its president.
She was a long-time member of the Carpe Diem Society and served as chairman for a while.
She received many awards in her life such as the International Women’s Year Award for her art exhibition in 1975.
In the 1980s, she also opened her interior design store, Interiors of Erie, where she worked until her retirement in the 90s.
Most notably, Yahn is known on Mercyhurst University’s campus for her endowment of the annual Patricia S. (Sontheimer) Yahn Student Juried Art show.
She also provided an endowment for the Penn State Behrend Art Show as well as scholarships at UPMC Hamot.
She participated with her late husband in Mercyhurst University art exhibits.
Jodi Staniunas-Hopper, Professor and Chair of the Mercyhurst Art Department, said, “When Patricia’s husband passed, she decided to make a generous donation to Mercyhurst which allowed for the endowment of the student art show.”
A forever endorsement, this allows Mercyhurst to keep utilizing the money from the growth versus the principal and it makes it possible to have the art show in perpetuity.
“Through her endowment, we’re able to generously award our students for their good artwork,” Staniunas-Hopper said.
“We’re able to hire an outside juror and have a nice opening, and this year we are even going to be adding a framing workshop so that the students can learn how to mat and frame their works.”
Staniunas-Hopper added, “All of this is made possible through Patricia’s gift to the College, for which we are very thankful and blessed.”
Mercyhurst Art Gallery Director Jessica Stadtmueller said, “I went to her house a few years back to select a piece from her watercolor paintings for a watercolor exhibition we were doing in her honor, and I got to go downstairs to her studio space to pick anything I wanted to put in the exhibit.”
“What I found amazing about her house and studio out in the woods was that it was beautiful, and there was framed art everywhere,” said Stadtmueller.
Yahn traveled extensively, and Stadtmueller noted that she had many things from around the world in her home.
“She was always a happy, welcoming and warm person. Every time she was here at the gallery, she was very encouraging to the students. When I would ask her if she had any advice for the students, she said that they just need support and encouragement and that that was so important for our young artists to have. She was one of those people that you just like being around, she was so full of life and inspiration,” said Stadtmueller.
Patricia Yahn is survived by many family members including her brother-in-law and his wife, three nieces and nephews, her four children, thirteen grandchildren and four great-grandchildren.