XC races at Kutztown U. 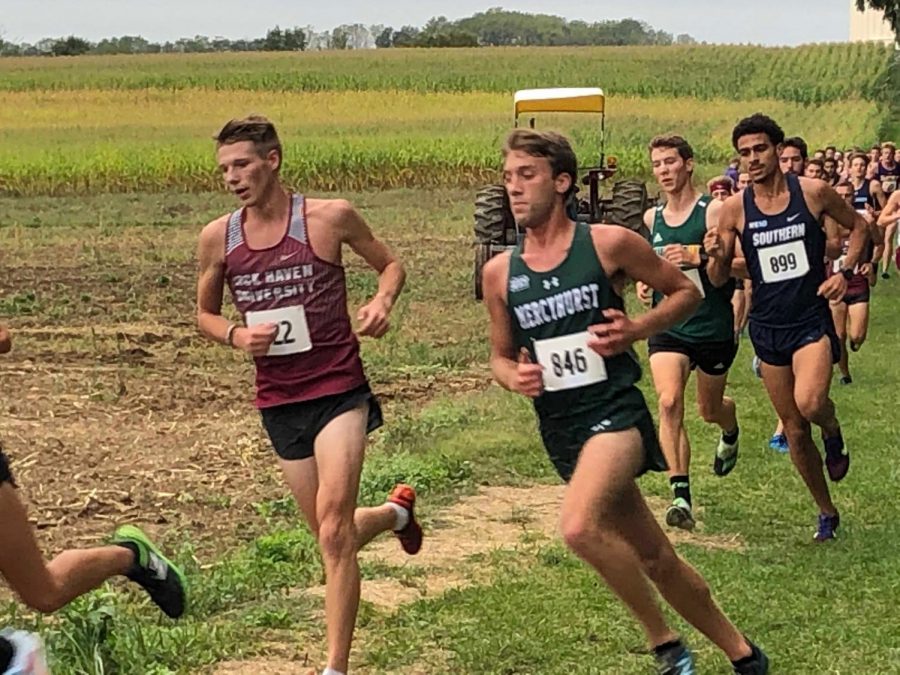 Mercyhurst’s Benjamin Barnes runs with a pack of racers through a field during Saturday’s race. The men placed 12 out of 15, while the women’s team placed sixth.

On Sept. 14, the men’s and women’s cross country teams competed at the Kutztown University Invitational DII/III Challenge. “The weather was fair and cool at the start of the morning races,” Mercyhurst Women’s cross country Head Coach Kathy Noble-Fraley said. “Everyone on both teams gave their best effort.”

The men’s competition took place at 9 a.m. and the women’s at 9:45 a.m. Given the amount of teams present, the Kutztown Invitational had a larger and more talented field for the athletes to measure their progress.

The Mercyhurst women, coached by Noble-Fraley and assistant coach Michael Williamson, placed sixth out of 15 teams at the invitational. There were 158 individuals at this event, with Mercyhurst being led by freshman Anna Alberti, who finished seventh overall with a time of 23:37. Rebecca King followed with a time of 24:19 in 22nd place and Claire Miller finished 35th with a time of 24:53. Rounding out Mercyhurst’s top five were Margaret Sutherland (60th, 25:31) and Maria Marullo (70th, 25:49).

When King described the team’s performance she said, “It was a pretty tough course, but I was really happy with the way everyone performed as individuals and also as a team. Everyone worked really hard.” Moving forward, King thinks it is important that everyone stays healthy and they all continue to improve. She stated that their goals for the season are “to be the best we can be and hopefully move up in our rankings for the region.”

Alongside the women, the Mercyhurst men’s team, who are coached by Head Coach Mike Fraley and assistant coach Michael Williamson, placed 12th out of 15 teams in the competition.
There was a total of 132 athletes that competed in the event. Mercyhurst was led by Joe Groth, finishing in 58th place with a time of 27:52. Ben Barnes followed in 61st place, with a time of 27:56. These two were followed by Maxx Palisin with 29:12, Dylan Bemiss with 29:14, and Estaban Waldmann with 30:24.

When asked about improvements moving forward, Palisin stated, “We need to focus on our end game, being conferences and regionals. It’s okay to have a bad race here and there, but we really need to put our eyes on the prize.” He added about the team’s performance, “every race we are beginning to look more and more like a full team.”  As for goals for the rest of the season, Palisin said they would really want to prove the PSAC pre-season poll wrong and shoot for anything in the top seven by the end of the season.

Mercyhurst’s next competition will be on Sept. 21 at the Lock Haven Invitational where they will be racing against Edinboro, Lock Haven, Slippery Rock and other teams within the PSAC and the region. “The meet will give the teams exposure to the top competition in our region and experience racing in a large field,” Noble-Fraley said.