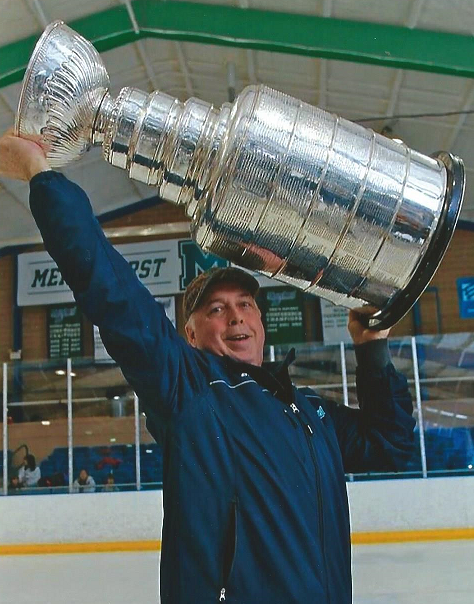 “The Lakers lost a great one in Mike Folga,” Mercyhurst University President Michael Victor said. “Folgs had a genuine likability. You simply felt good being around him. We will miss his friendship, his storytelling, his humor and his good nature. He truly was one of a kind.”

“He just had this kindness about him,” vice president for Student Life Laura Zirkle, Ph.D. said. “He loved hockey, and he loved Mercyhurst hockey. It’s a real loss for the university.”

Before coming to Mercyhurst to be the program’s equipment manager, Folga worked inside a number of professional sports organizations. Folga’s start was in baseball, working with the Cardinals, Pirates and Cubs organizations.

After working in baseball, Folga switched into hockey, starting with minor league teams in Virginia and Peoria, IL. Folga then moved into the major leagues, spending 11 years in the NHL with St. Louis, Chicago and the New York Rangers.

“My heart’s broken, and I’m very sad,” Mercyhurst men’s ice hockey Head Coach Rick Gotkin said. “We lost a really special guy, and even though we kind of knew it was coming, it’s very difficult to wrap your arms around. He was a gigantic part of our program. He has touched so many countless lives in our program, and even with his whole background globally. He’s touched so many lives. He’s a giver.”

Gotkin, who has been the Men’s ice hockey coach since the program’s inception, had worked with Folga since that period.

Last January, Mercyhurst rallied around Folgs in a game against American International, with the night designated “Fighting for Folgs”.

“Mike was an unbelievable ambassador of the university,” Athletic Director Brad Davis said. “For our athletes, for our staff, for anyone. He was everything Mercyhurst is. We’re lucky we got to celebrate ‘Fighting for Folgs’ last year, for his family and for the Mercyhurst community. Just who we are, Mike embodies that.”

Given his connection with the program, Folga touched the lives of numerous members of the Mercyhurst men’s ice hockey team, past and present. “To many he was the guy wearing camo, but Mike Folga is one of the most selfless human beings I have ever been around,” Garrett Metcalf, redshirt senior goalie for the Lakers said. “Many may think that being an equipment manager is an easy job, and I can tell you it’s not. Folgs spent many nights sleeping at the rink, making sure skates were sharpened, laundry was done. He ensured every detail needed for individual success was taken care of. He never once complained, his enthusiasm never wavered, even when he was fighting cancer. I don’t know anyone who liked being at the rink, or around the game of hockey as much as Folgs.”

Fogla’s longspanning career also meant he was present for many memorable moments of Mercyhurst hockey. One such occasion was when the Lakers hosted the Stanley Cup on campus during the 2014 season. The event was an exhibition during the Men’s ice hockey game against Bentley University. Folga, who had been the equipment manager for the 1994 Stanley Cup-winning New York Rangers, got to hoist the cup during the event.

“The place was packed,” Gotkin said. “The Stanley Cup was on campus, and the line was out to the Student Union door. People came from everywhere to see the Cup and to see Mike Folga’s name on the Cup.”

But what defined Folga the most was his commitment to the team and giving it his all.

“One of my favorite stories about Folgs comes from when we were on a weekend long road trip my freshman year,” senior forward Brendan Riley said. “Our hotel was 30 minutes away from the rink where we were playing that weekend. Folgs took it upon himself to actually spend the night in the rink and sleep on the trainers table in the visitors locker room so that he could prepare for our morning skate and the game that next night. Sharpening skates, preparing equipment, organizing the room and even doing the laundry through the night just to make our lives as players and coaches a little easier. Folgs put others before himself and tirelessly dedicated himself to making the lives of others more enjoyable.”

Such stories about Folga are shared by everyone, including Gotkin, who had a long friendship with Folga.

“Everybody can tell you a Mike Folga funny story, and a Mike Folga giving story,” Gotkin said. First time I met Mike Folga, he came up to me and said ‘I don’t want to make you nervous, but the last four Head Coaches that I worked with in the NHL all got fired’. I was like ‘Oh no, what does that mean,’ but I’m still here, and Mike and I had a great relationship over the past 20 years.”

The funeral for Mike Folga will be held Saturday, Sept. 21; friends may call at St. John the Baptist Catholic Church, East 26th and Wallace St. from 9 a.m. to 11 a.m.

“If you want to honor Mike Folga, you live your life the right way,” said Gotkin. “You be kind to people, you be respectful to people, be inclusive of everybody and find a way to give, because Mike Folga gave.”

“He was more than an equipment manager, he was a friend, a jokester, hard worker, Folgs was family,” Metcalf said. “And he will be missed dearly by the Mercyhurst community, and all others who knew him.”