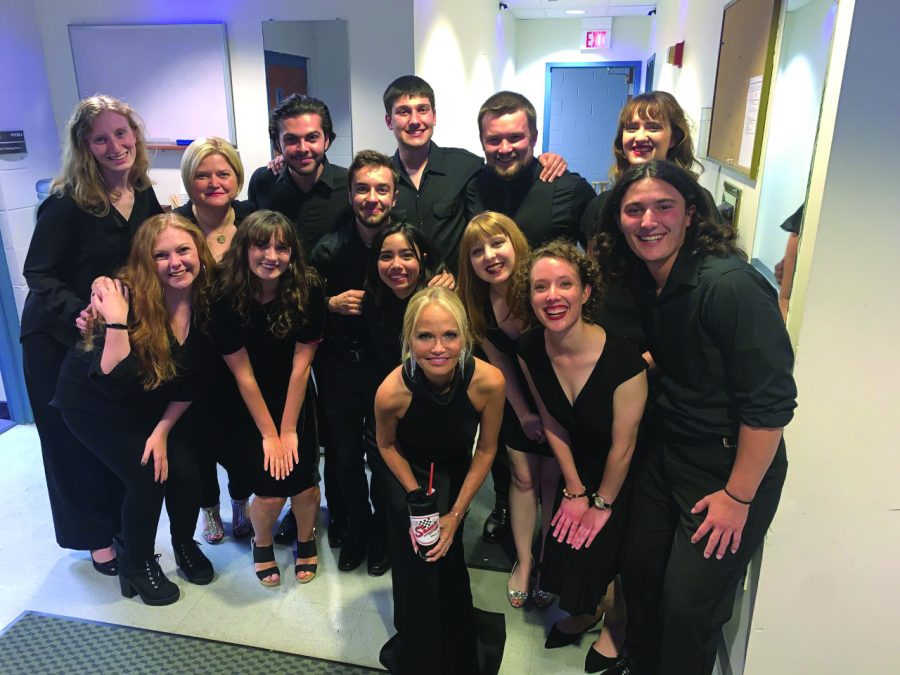 On Sept. 19, MIAC Live presented Kristin Chenoweth in
Concert.
Chenoweth, an Emmy and Tony Award winning actress and singer, sang a variety of songs from her past albums, including her newest, “For the Girls,” which is set to release on Sept. 27.

Chenoweth’s performance started with energy as she came out to massive applause wearing a Mercyhurst University t-shirt over her sleek evening gown and sipping a drink from Erie’s own Sara’s Restaurant.

She began the evening with Victor Herbert’s “Art is Calling for Me,” an upbeat tune from “The Enchantress” about a singer’s love for performing, which showcased Chenoweth’s impressive operatic range.

Chenoweth then took a more sentimental route, singing “I Get Along Without You Very Well” by Hoagy Carmichael and “Fifty Years Long” by Jason Robert Brown, which paid homage to her parents.

Next, Chenoweth teased the audience with two songs from her new album “For the Girls,” which is meant to be a symbol of women’s empowerment by showcasing music by female singers and songwriters.Her performances of “I’m a Woman” by Peggy Lee, “Desperado” by the Eagles and “The Way We Were” by Barbra Streisand were well done and well received by the audience. Chenoweth then performed a humorous number poking fun at “millennialisms,” or slang terms used by young people today such as “lit AF” and “beast mode.”While this song seemed awkward sandwiched between power ballads and musical theater classics, it received laughter and applause from the audience whose members could relate to either not understanding the terms or using them in their everyday conversations.This was followed by an emotional performance of “Bring Him Home” from the award-winning musical Les Misérables.

Before performing the piece, Chenoweth invited veterans sitting in the audience to stand and be recognized for their service.

Next, to the delight of many in the audience, Chenoweth performed “Popular” from the musical “Wicked” in which she originated the role of Glinda the Good Witch in 2004.

Chenoweth even encouraged audience participation and recording of the number, which many diehard fans of the musical took her up on.

Following this was a powerful rendition of “Somewhere Over the Rainbow” from “The Wizard of Oz,” which inspired “Wicked” and the novel it was based on.

Chenoweth and Campbell then performed a comical number called “I’m Not a Diva” from the unproduced musical adaptation of the film “Soapdish,” which left the audience full of laughter.

Chenoweth finished the evening by inviting several Mercyhurst students and alums to perform on stage with her.

The pieces performed by Chenoweth and the Mercyhurst students included what Chenoweth jokingly dubbed “Jesus songs” and showcased her deeply rooted Christian faith.

The first hymn, “How Great Thou Art,” received a massive standing ovation from the audience at its completion.

The next songs, “Halleluiah” by Leonard Cohen and “Reasons for Hope” by Mary-Mitchell Campbell, were also received extremely well by members of the audience.

They concluded with Chenoweth and the students filing off stage, hand in hand, after another standing ovation.

Chenoweth’s encore performance was “Smile” from her album “Art of Elegance.”

She and Campbell performed the song as a duet and then exited the stage together after thanking the audience one last time.

Her astonishing vocal abilities mixed with the high energy she kept up throughout the entire evening were phenomenal.

If you enjoyed this performance or were not able to attend, be sure to get tickets for the next MIAC Live event, starring David Sedaris, on Oct. 18.