Celebrating community at the 2019 Mass of the Holy Spirit 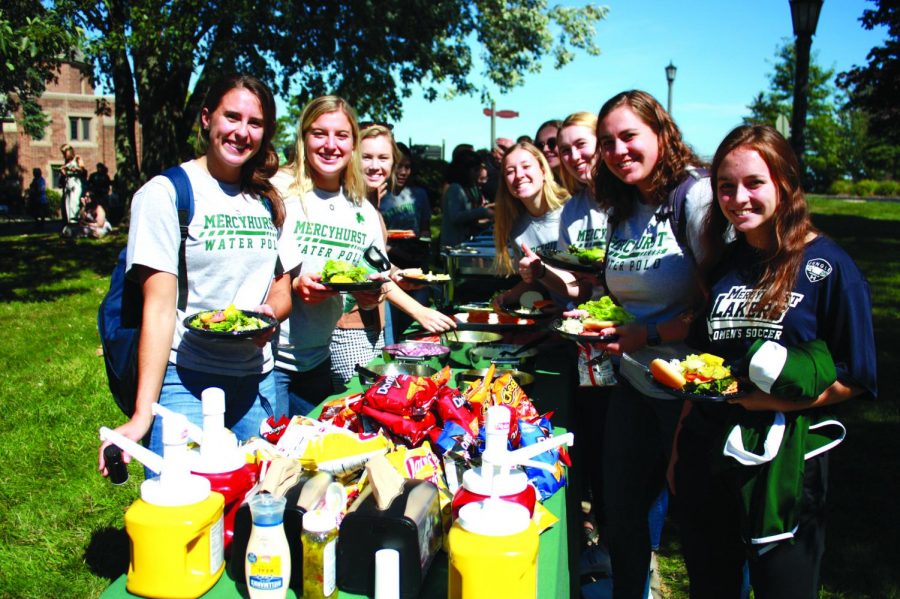 With the back to school season drawing to a close, Mercyhurst once again celebrated the annual Mass of the Holy Spirit, on Sept. 19.

Designed to fall near Sept. 24, the feast day of Our Lady of Mercy, the mass brings the community together. This year student members of Mercyhurst Concert Choir and the Liturgical Dance Ensemble lent their creative talents to the mass, student athletes attended in uniform, the marching band played music for the picnic and hundreds of other students, staff, sisters and Mercyhurst community members attended the mass and picnic. In this way the mass brought together not only students with each other but with staff and the Sisters of Mercy.

“The amount of students who come out, especially the student athletes who come out every year is really exciting,” Greg Baker, Ph. D, Vice President for Mission Integration, said. “To see the incredible talent and goodness of our students come out as musicians, as dancers, those who serve and help with the mass and knowing that it’s a welcoming environment for people of different cultures, and different religious backgrounds shows that it’s a celebration of who we are at our core.”

Additionally, the coordination of the mass is a collaborative effort involving many Mercyhurst staff including Mercyhurst campus ministry, the office of the Provost and the Sisters of Mercy themselves, who serve as lectors and eucharistic ministers.

“It’s a whole bunch of people that put this together and make this work,” Father Jim Piszker, University Chaplain, said.

Another tradition of the Mass of the Holy Spirit is to bring in a guest celebrant from outside the Mercyhurst and Erie communities to bring a unique perspective to the celebrations. This year the presider was Maryknoll Priest Father Doug May, who shared a message of acceptance of the other, in accordance with the Mercy value of compassionate hospitality.

“I think he presented himself as down to earth and I think his message resonated with students because of that,” Piszker said.

Baker found Father May’s missionary experience was an important example to set forth for students trying to live the Mercy Mission.

“We thought that his experience as a missionary, particularly in the Middle East and in Egypt, brought a whole different perspective on the world and on the challenges and possibilities of people living together peacefully,” Baker said. “I thought he had a really profound and important message to share.”

Father May’s homily was right in line with the spirit of the mass to bring people of different groups and backgrounds together for one common good.

“With all the global tensions and national tensions, I think it’s important to remember that the faith this university centers on calls people to something bigger than solving conflicts through violence,” Baker said.

One of the most unique aspects of the Mass of the Holy Spirit features a second reading, the Pentecostal Sequence, interpreted and presented in a variety of languages, representing the diversity of the community and embracing it.

In this spirit, members of the Mercyhurst community of all backgrounds are invited to celebrate together. Riley Polkowski, a freshman Cybersecurity major and member of the Men’s soccer team, is a Lutheran, but found the mass to be a way to build community

“It’s a nice service,” Polkowski said. “I think it’s nice that so much of the school comes out and the sports teams come together, so it’s a really cool thing.”

Nick Woll, a senior majoring in Psychology and Religious Studies, has attended the mass for four years now.

“It does have a special place in my life because it allows all the students to come together. It gives me an opportunity to not only spend some time with friends but also to spend time with my faith and allow myself to be connected to the school,” Woll said.

The mass further serves as a counterpoint to another celebration of the Mercy tradition in the spring, a celebration of Thanksgiving. Typically celebrated in April with a mass or other service, the Thanksgiving celebration provides a chance to give thanks for the Sisters of Mercy and all they have done for the school.

The Mass of the Holy Spirit has once again brought Mercyhurst together in community and faith for an afternoon of prayer, reflection and fun.

“I think it’s one of our best traditions here, period,” Baker said.