Students strike for a change in environmental policy in US 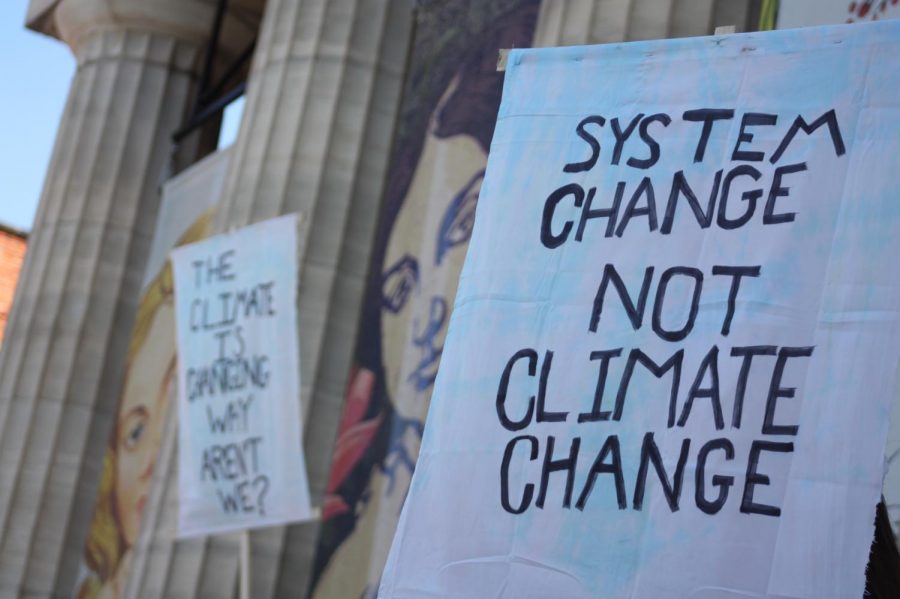 “Winter is NOT Coming,”read the sign in senior Environmental Science major, Greta Taine’s hand as she sat on the marble steps of the Erie Art Museum at the Sept. 20 Youth Climate Strike.
Taine, along with about 150 other people, gathered at the site to peacefully protest government inaction on climate change related issues.
The event began with an open-mic session at the art museum which gave local activists a chance to share their experiences and ideas with the crowd.

“It was a rather small group at the start, which I liked. There are varying degrees of how people feel about climate change and this gave people who felt really strongly about the issue a platform to speak before more people joined in,” Taine said.

A more intimate setting at the museum steps kicked off the day from 10 a.m.- 12 p.m., after which the group marched around Perry Square and stopped to rally outside of the United States Courthouse.

There were people of all ages at the strike, many of whom skipped work and school to be part of the global effort.
150 countries participated in the strike around the world, giving children and adults a chance to speak up and pressure local governments to act.

The climate strike fell days before Monday’s U.N. Climate Summit, held in New York, where there is hope that more governments and businesses will take genuine steps to reducing or eliminating fossil fuel use.

Fossil fuels like coal, natural gas and petroleum are major contributors to the climate change crisis because of the greenhouse gases that are emitted when they are produced or burnt for fuel.

Eliminating fossil fuel use and protecting major ecosystems like forests, grasslands and marshes are critical steps that must be taken to reduce the impacts of climate change.

Ecosystems like these are important because they act as carbon sinks, pulling carbon, a driving force of climate change, out of the atmosphere and holding it in the earth.

Public involvement in environmental activism has been a powerful movement for decades. In recent years, however, more and more children and young adults have accepted the call to action and begun to participate as well.

Greta Thunberg, a 16-year-old Swedish activist, has recently become an emerging face of the environmental movement. Thunberg, who started Fridays for Future, gathered support around the world for skipping school every Friday since August 2018 in protest of government inaction on climate change issues.

Today, young people everywhere are beginning to realize how much this crisis will impact their lives, and they are speaking up about it. This was evident at the Sept. 20 Erie Climate Strike, as many of the participants were kids and young adults.

“There are so many of us and sometimes it feels like the older generations have given up on the problem. We will be the next to fill leadership and government roles in society, so it is important for us to set a precedent so that our generation knows what we expect from one another.” Taine said.

Early counts estimated that millions participated in this year’s climate strike, a powerful statement to legislators everywhere.
Time will tell if the turnout at this event will sway any decisions at the U.N Climate Summit on Sept. 23, but it nevertheless was an encouraging sight to activists around the world.