Ford draws the line at capitol 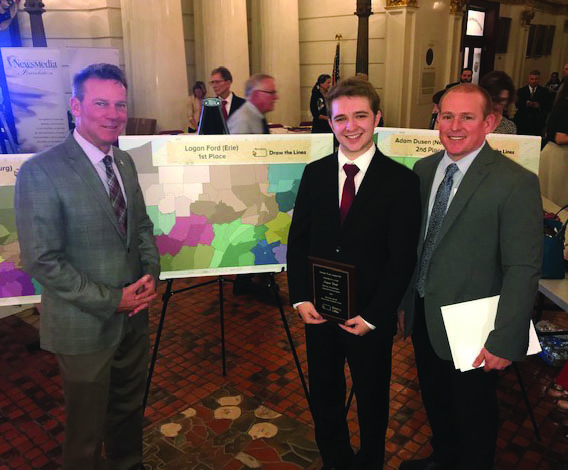 On Sept. 24, senior Intelligence Studies and Political Science major Logan Ford traveled to Harrisburg to compete at the state level for the “Draw the Lines” competition.

“Draw the Lines” is a non partisan organization with the goal of eliminating gerrymandering, which is the unfair drawing of voting districts, to favor one party over another.

“Draw the Lines” allows the public to draw their own congressional and state senate districts to address this issue.
Originally done for a class last fall, Ford was excited over the possibility to revisit the topic.

“The fun I had being a political nerd was enough to get me to enter again for the current competition without being required to for a class” said Ford.

When drawing their maps, contestants looked at factors such as competitiveness, population, equivalence and compactness.
“I decided to draw my map to have the most compact districts possible, the most number of competitive districts possible and divide counties between districts the least amount of times without sacrificing any one of these criteria for the other,” said Ford.
Ford went on to describe why he chose these specific criteria to focus his map around.

“I chose these values because they are the ones laid out in the PA Constitution in regards to drawing congressional districts,” said Ford.
Last semester Ford won a regional honoree award in the Western Higher Education Division. He also won a regional award for creativity.

Following these wins, Ford was invited to the state capitol to compete at the state level.
During the day, Ford participated in an awards ceremony and also got to meet with Pennsylvania Chief Justice Thomas Saylor.
On Sept. 24 at the award ceremony in Harrisburg, Ford won the state wide Grand Prize and $5,000 for the Higher Education age group.

He is also in the running for the People’s Choice competition, but due to the close number of votes, is currently undergoing a recount.
Mercyhurst as a university also represented at the competition. Joseph Morris P.hD., associate professor and chair of the Political Science department, accepted an award on behalf of the department for our campus’s involvement.

“The experience has been a true testimony to how the public can and should participate in democracy. It was exhilirating and an honor to not only represent Mercyhurst, but Erie as a whole,” said Ford.