ECOboxes are expected to create an immediate positive impact on the environment by lessening trash generated by the Mercyhurst College campus while still offering the food to-go program that so many students utilize and appreciate. 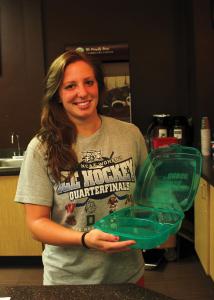 According to Kim Novak, the general manager of dining services, the change was made because “Egan Dining Hall was handing out an average of 200 plastic to-go containers each day—about 1,400 a week—and that is a significant trash impact on our environment.”

“Over 600 ECOboxes were distributed to the incoming freshmen and RAs, and we are typically exchanging 75 boxes each day, which is a lower number of to-go containers out of Egan compared to last year,” Novak said.

The boxes are also sold “at the door for a one-time fee of $2.50, which covers the production cost,” she added.

Payments can be made in cash, credit, dining dollars or bonus bucks. Freshmen and RAs received the boxes for free.

“As the school year progresses, I anticipate more ECOboxes will be purchased by the upperclassmen, staff and faculty,” Novak said.

Sustainability Officer Brittany Prischak said, “Our office helped to submit a proposal to the Student Green Energy Fund for partial funding of the initial purchase, which included 1,500 containers.”

As for the benefits, Prischak added that using the ECOboxes “saves landfill waste every year. Even though the to-go containers that were being used at the Egan Dining Hall (and still used at the Laker Inn) are recyclable, not many people actually recycled them. So, with the start of the ECObox program, we are able to save thousands of plastic containers from the trash.”

Senior Andrew Mayher said, “I think it’s a fantastic idea, except I do not believe RAs and freshman should be the only ones to receive the ECOboxes for free.”

Yet students seem to be very satisfied with the program.

Novak said, “There are no foreseeable disadvantages at this time. Parkhurst Dining Services and the Green Team are excited about the success and acceptance of the program at Egan Dining Hall.”