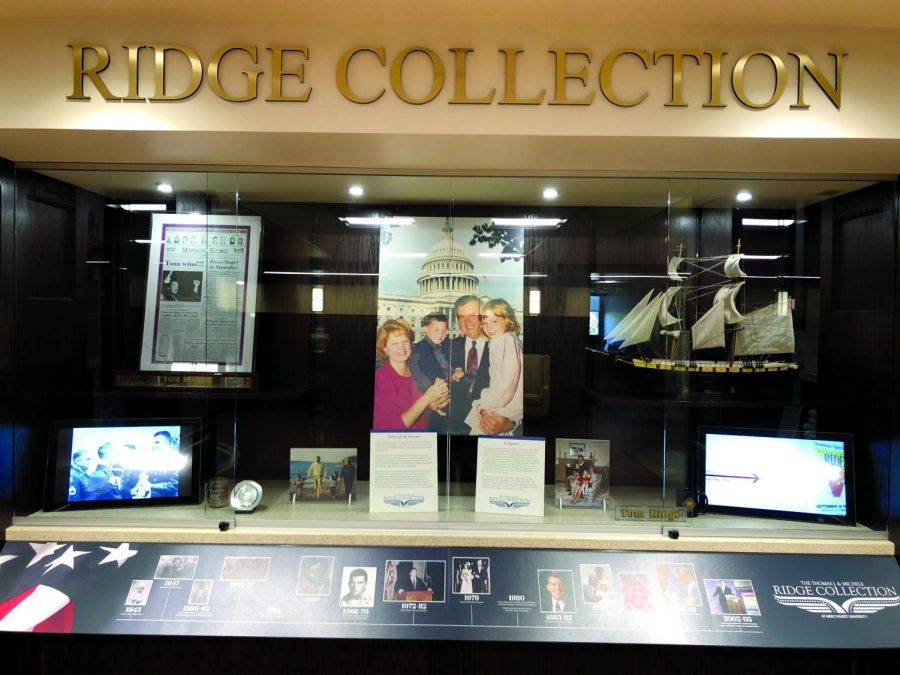 During reconstruction of the Hammermill Library, Mercyhurst included several displays of The Ridge Archives on the first floor. These archives display different artifacts, photos and letters that were significant to former Governor Tom Ridge.

University and Ridge Archivist, Bryan Colvin, was a key part of making this project a reality.

“It was higher administration’s idea to set the archives up,” Colvin said. “There were also donations given to them by the Arnold Palmer Foundation and the Hillman Foundation.”

The reason for the construction of a special place for the archives was because Mercyhurst wanted to showcase the life of Governor Tom Ridge in a more prominent area.

Until the display cases were built, the artifacts were only sitting in boxes in the archives, right next to Colvin’s office on the third floor of the library. The reconstruction of the library provided the perfect opportunity to showcase the history of Tom Ridge to the Mercyhurst community.

Tom Ridge was an extremely influential figure within the Erie community, and Mercyhurst in particular.

Colvin believes that the displays will inspire future generations of students to succeed.

Colvin decided how the showcase layouts were designed and what specific items were on display.

The creation of these displays involved collaboration from many different members of the Mercyhurst community.

They helped to make the display cases visually appealing, along with providing photographic prints of any of the desired images. Some students even aided with gathering items, such as senior Molly Kennedy and sophomore Shannon Gotham.

The main display of the Ridge Archives is a timeline detailing all the events of his life with memorabilia accompanying it.

This display also has a screen that plays a video explaining its importance.

To the left and right of the display are plaques dedicated to Elsie Hillman and Arnold Palmer, whose foundations helped finance the project with donations.

The first floor displayinclude a variety of items from Ridge’s career.

Mr. Rogers’ iconic sweater, given to Governor Ridge by the man himself, is on display along with a personalized note. There is also a series of letters sent by Presidents George Bush and Bill Clinton to Governor Ridge.

Aside from professional work, there are photos and items dedicated to his wife and family.

Other artifacts include items that he received from different Republican conventions that he attended, photos of him alongside celebrities such as Tom Hanks and a helmet gifted to him by the Seattle Fire Department after the Top Officials Exercise.

The plethora of memorabilia and information shown from these displays should give students an impression of who former Governor Tom Ridge is and his importance to the Erie community.
Colvin and his collaborators have worked to make sure that our students remember his legacy.