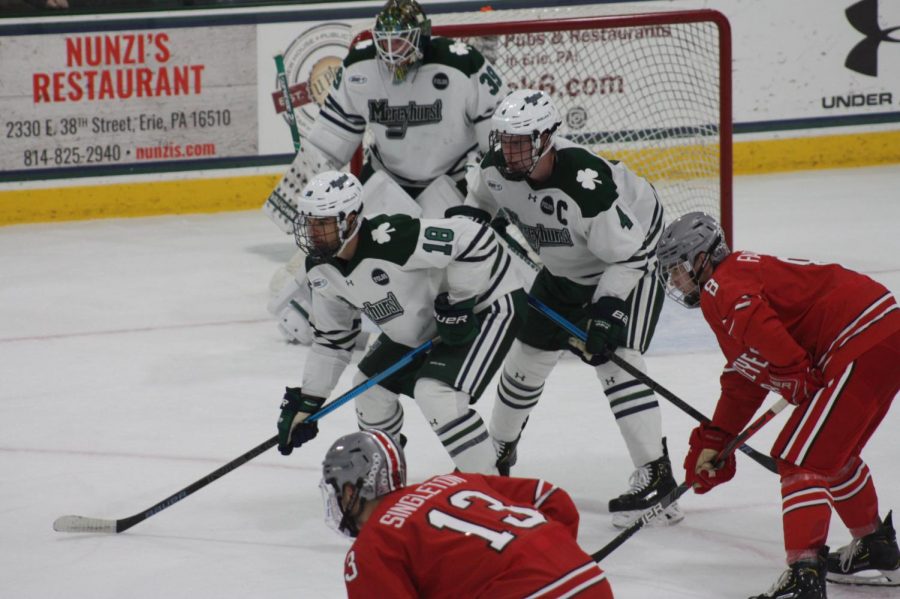 The Lakers’ No. 18 Dalton Hunter races for the puck, followed by teammate No. 4 Quinn Wichers. Goalie Garrett Metcalf watches vigilantly to prevent a score.

Despite holding the home-ice advantage, the Lakers fell by scores of 7-2 and 3-1. The first game of the series began on Friday with the Laker student section decked in white and fired up for this special series.

The fans were going crazy even before warmups started. Even at the beginning, the intensity was in the air, with the Laker faithful setting the stage for the two-game spectacle. The first period was jampacked with seemingly flawless hockey. Officials seemed to let the players play, which ultimately led to a scoreless period.

But danger struck when two Lakers were sent to the penalty box, and the Buckeyes took advantage of a five-on-three at the 15-minute, 30-second mark to draw first blood.But the Buckeyes weren’t finished, as they added another power-play goal to make the score 2-0. They piled on by adding a third goal to light the lamp at the 17:15 mark.

But the Lakers woke up, and defenseman Cade Townsend tallied the first goal for the Lakers to gie the loud crowd something to cheer about.But then, with three seconds remaining in the second, the Buckeyes would cap off the period with another goal to take a 4-1 lead over the Lakers into the third period.

The third period began with a bang, with forward Steven Ipri lighting the lamp 41 seconds into the third, cutting the Buckeye lead in half at 4-2.But when things appeared good and momentum was shifting in favor of the Lakers, the Buckeyes scored 54 seconds later. That tally ended up making it 5-2, and the Buckeyes eventually added two more goals to take the first game of the series 7-2 over the Lakers.

The second game of the series, which was played once again at the Mercyhurst Ice Center on Oct. 26, had a slow beginning compared to the first.Game two was not as action-packed as the first game and began with a little bit of chippiness on both sides.

However, the Buckeyes capitalized early at 9:09 of the first period.Just 26 seconds later, the Lakers evened the score with winger Dalton Hunter scoring the first goal for the Lakers. The Buckeyes would score two more times in the second period, and the Lakers did not manage a response. This resulted in the final score being 3-1, making the Buckeyes the victors of the two-game home series.

After the second game, coach Rick Gotkin shared what he thought of the series against the Buckeyes.“They were the better team,” he said. “They’re the No. 15 team in the country and with seven NHL draft picks playing, I was proud of our team. I thought we had a really bad second period (Friday), our first period was okay and our third was okay (Friday). (On Saturday) though, I loved our competetiveness and I loved the way we stuck with it. We had chances and I liked a lot of things we did.”

The Lakers are now 2-4 (they have not played any games in conference to date) for the 2019-2020 season so far.Gotkin is looking ahead to the Lakers’ next series against Bentley University. The Lakers will travel to Waltham, Massachusetts for a pair of games Friday and Saturday against Bentley.

“We’re just getting better,” Gotkin said. “We had seven freshman dressed and eight sophomores and we just have to keep competing.”Bentley is currently 2-3 overall and 1-2 in the Atlantic Hockey Association.