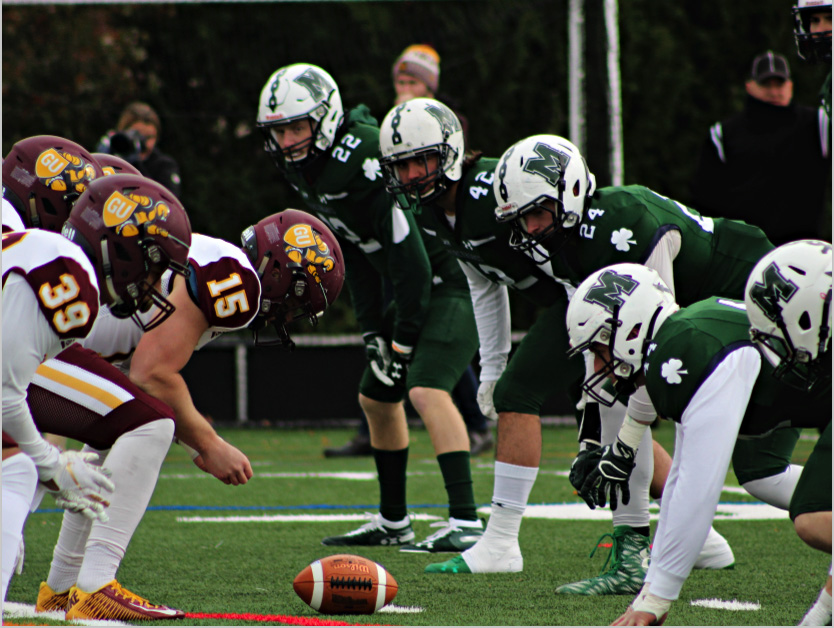 The Mercyhurst defensive line prepares for Gannon to snap the ball during Saturday’s game. A strong defensive showing shut down Gannon’s offensive productivity, resulting in a 28-7 Mercyhurst victory.

In the final home appearance of the regular season, a scoreless first half led to a 28-7 Senior Day victory for the Lakers over the crosstown rival Gannon University Golden Knights. “We overcame some first half adversity and played a very good second half,” said Head Coach Marty Schaetzle. “We did a good job winning the battle upfront, especially our defense, made big plays on offense.”

The first half of the Niagara Cup rivalry game saw neither team get on the board, with both offenses struggling to be productive throughout the first quarter. In the second quarter, redshirt senior quarterback Doug Altavilla almost put the Lakers on the board, but his pass was intercepted by Golden Knight defensive back Jayden Ashby in the end zone.

Doug Altavilla would get his revenge, however, finding redshirt senior wide receiver Clayton Waldron, who took the pass all the way from the Lakers’ own 20 yard line to the Golden Knights’ end-zone. Junior kicker Mark Shafer Jr. then put the icing on the 80 yard, 15 second drive, giving the Lakers a 7-0 lead.

Two drives later, the game was suspended for 10 minutes after the Golden Knights’ Ashby sustained a hit to the head on the play. Ashby is reported to be doing well despite sustaining a concussion.

The Golden Knights’ next drive would result in a touchdown, and the extra point tied the game 7-7. In response, the Lakers’ would make the closing score of the third quarter 14-7, with Altavilla throwing to Waldron twice, and redshirt junior running back Garrett Owens running it into the end zone.

The fourth quarter would only see the Lakers take to the scoreboard, as the Golden Knights’ touchdown in the third proved to be their only conversion of the game. On Mercyhurst’s first drive of the fourth quarter, Doug Altavilla threw to Waldron and sophomore fullback Jason Armstrong for three first down conversions before connecting with brother and redshirt junior wide receiver Nick Altavilla in the end zone. Four drives later, Owens powered in again after a series of runs to make the games final tally 28-7, Lakers.

The Lakers totaled 465 yards of offense, with 355 coming from passing and 110 netted from running plays. At quarterback, Altavilla threw for 312 yards and had two touchdowns, while freshman quarterback Michael Lowery threw for 43. Waldron had 182 yards receiving and a touchdown, with his longest being his 80 yard touchdown run. Owens rushed for a net 104 yards while also putting up 77 yards receiving, for a combined total of 181 yards and two touchdowns on the game.

On defense, the Lakers held the Golden Knights to just 140 yards for the entirety of the game. Senior linebacker Alex Zacharyasz led the defense with nine tackles, followed by linebackers redshirt junior Joseph Scro and Eljon Williams for seven tackles apiece. Redshirt senior defensive back Jake Tarasovitch and sophomore Bradley Burrows each recorded forced fumbles. “Our defense played great the whole game and held them to only seven points,” said Waldron. “And in the second half our offense started to make big plays and finish drives.”

Two more games make up the Lakers’ (4-5, 2-4) schedule for the season, with road trips to Clarion University (3-6, 1-5) on Nov. 8 and Millersville University (2-7, 1-5) on Nov. 16. “We have an opportunity to give our seniors their first winning season in their collegiate career,” said Altavilla. “Although this is the end goal, we are focusing right now strictly on Clarion. Clarion is a good football team who have been in every game they’ve played this season. We will need to play in front of the chains and convert on a high percentage of third downs in order to give ourselves a chance to beat them.”