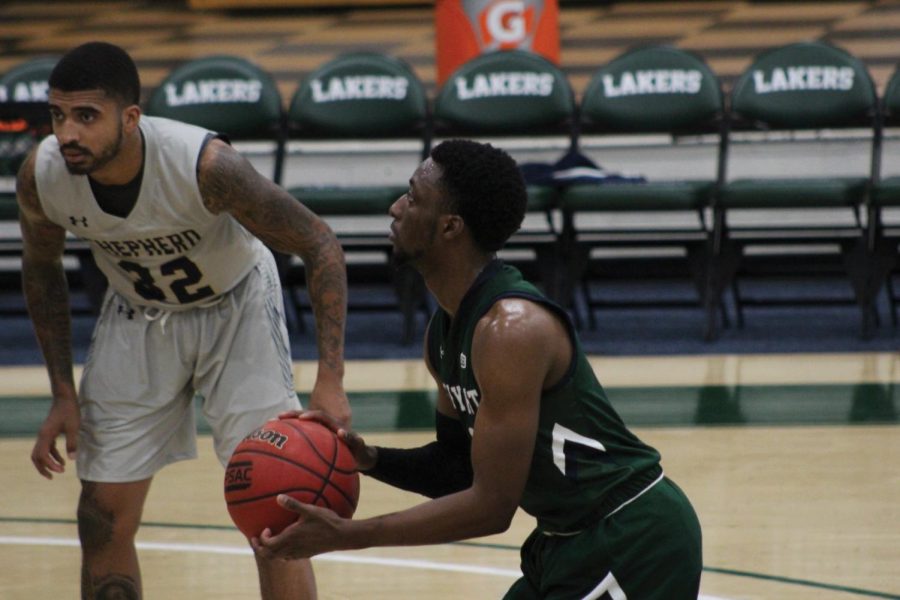 Mercyhurst’s Miykah McIntosh, No. 0, prepares to shoot a free throw.

After defeating Millersville University 87-85 on Nov. 23, the Mercyhurst men’s basketball team entered the court the following day very confidently to face the Shepherd University Rams in the cool confines of the Mercyhurst Athletic Center.

In the opening five minutes of the game, both sides fought for every inch of the court. Five consecutive shots from both teams resulted in three ties to start the score at 10-10. The Rams capitalized on a Mercyhurst foul allowing Shepherd to hit two free throws giving the rams a two-point lead.

Mercyhurst would not stand around as guard Steve Cannaday added a three-pointer, returning the lead to Mercyhurst. The Rams quickly responded with a triple and six more points in a surprising nine point run giving the edge back to Shepherd with a score of 21-13 with 9:28 remaining. The Lakers quickly responded with a pair of three-pointers by guard Trystan Pratapas to cut into the Rams lead, making the score 23-19 at the 11:44 mark.

Shepherd would then respond by adding seven more points with five minutes left, turning the score to 30-21. Going on an 11-2 rampage, the Lakers’ Miykah McIntosh buried a triple. Forward Joel Ufele capped off McIntosh’s basket with a jumper to tie the game at 32-32. With two minutes left, guards Nicholas Lang and Zach McIntire added two baskets, turning the score back to another tie at 34-34.

Guard Michael Bradley then sunk an unbelievable three-quarters court shot to give Mercyhurst a three-point lead at halftime with the score 37-34. The Lakers started strong to begin the second half with Ufele, McIntire and Lang combining an 8-3 push giving the Lakers an edge with the score 45-37 with 17:48 left.

With 15:33 remaining, the Laker faithful clung onto a 45-38 advantage. Ufele knocked down a two, adding insult to injury with the score 47-38.From then on, the Lakers dominated on the floor adding 14 points, wrapped up nicely by four baskets by McIntosh to stretch the Laker lead to 59-38 at the 9:24 mark.

The Rams tried anything to chip at the Lakers’ performance by adding five more points, cutting the lead to 59-43 at exactly the ten-minute mark. Shepherd’s surprising run came to a halt as both teams went cold.The Lakers eventually took over, ultimately taming the Rams. At the 14:39 mark Lang hit two free throws to cap off an 11-0 run.

The game ended with Mercyhurst on top, with the final score 69-59, and thus, sweeping the weekend.

Coach Manchel shared what he felt the Lakers need to improve on even after getting the win.“We were sloppy in some areas, but I felt we played a good game, we made some big plays and got the win which helps.”

The men’s basketball team is set to face West Chester University of Pennsylvania away on Dec. 7. The next home game is Dec. 14 versus the Le Moyne College Dolphins at 3 p.m.