The Public Affairs Forum is part of the new Center for Applied Politics’ Experiential Learning Curriculum, which includes both the forum and getting political science students involved in public opinion polling and other activities on campus.

The Forum invited former Congressman Phil English to speak on the history of the Constitution of the United States as well as constitutional dilemmas he faced during his time in office.

Congressman English was a Republican representative for the Third Pennsylvania District from 1995 to 2009 and served in the House of Representative’s Ways and Means Committee.

At the Forum he discussed the history of the Constitution, the issues of constitutional law dealt with during his time as a U.S. Representative and future conflicts that the nation’s Constitution may face, as well as answered student questions.

“The founding fathers had a different and alien view of constitutionality,” English said. Because of this shift in focus, “Liberty and property crowded out equality.” 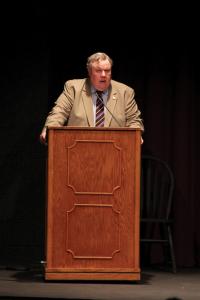 Jill Barrile photo:: Former Congressman Phil English addressed the student audience at Friday’s event.
The ‘Founding Fathers,’ many of whom have nearly taken on a superhero persona, were more concerned with tyranny and how to prevent it. That is why there are so many different aspects of the Constitution that deal with decentralizing power. This creates, “the very real danger of inertia and gridlock (in government) – exactly what the founding fathers wanted,” he said.

“Today’s crises are erosive and highlight challenges facing the Constitution and its periodic internal inconsistencies,” said English, citing the War Powers Act as legislative interference with the president’s powers as commander & chief of the armed forces.

When the question and answer portion of the presentation arrived, the attendees wrote questions on note cards, which were then reviewed by professors before being handed off to another student to read. This process expedited the usually lengthy Q&A sessions and allowed students to have their say even if they were too shy to speak in public.

The questions that survived the screening process were predictable, though Representative English answered eloquently and helpfully.

When asked about government accountability, English replied, “Be vigilant – use the tools at your disposal, push for transparency in government, force organizations to be representative of you. Shift the power back to informed individuals.”

The Public Affairs Forum is attempting to do just that – bring the students of Mercyhurst closer to information that will help them function as responsible citizens beyond their time at Mercyhurst.