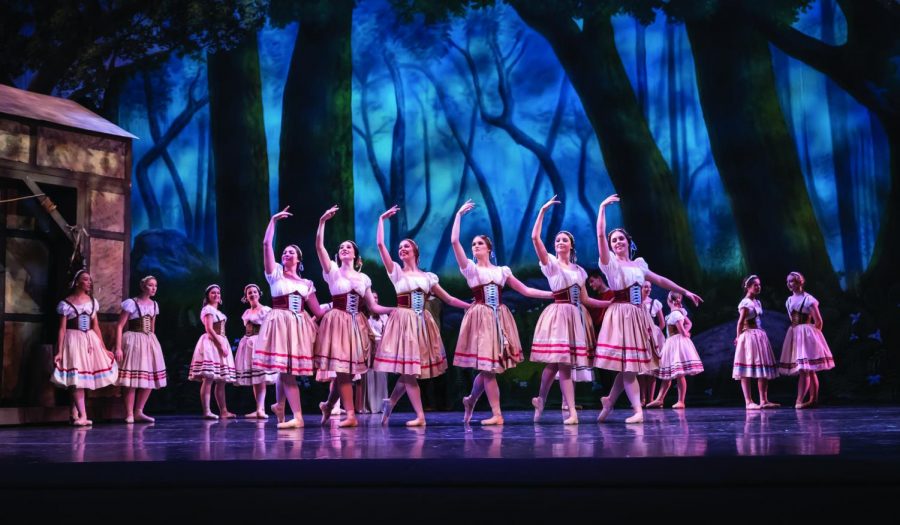 On Nov. 22, 23 and 24, the Mercyhurst Dance Department and The Mercyhurst Civic Orchestra presented “Giselle.”

The ballet was directed and produced by C. Noelle Partusch and featured a live orchestra directed by Jonathan Moser.

Giselle, which is set in a medieval Rhineland village, revolves around two lovers: Giselle, a peasant girl, and Albrecht, a member of the nobility.

The first act of the ballet is set in the bright and lively woodland village where Giselle lives with her mother, a protective woman who is constantly concerned with her daughter’s weak heart and discourages her from dancing.

Among the hustle and bustle of everyday life, Albrecht appears with his squire and quickly disguises himself as a villager so he can meet Giselle.

The pair fall in love upon meeting, much to the excitement of Giselle’s friends and the dismay of her mother.

In an attempt to keep his identity a secret, Albrecht hides upon the arrival of a group of noblemen, which includes his betrothed, Bathilde, and her father.

To signal the arrival, a member of the company, clad in rich clothing, strutted around the stage accompanied by a very regal looking dog.

The audience was enthusiastic about the dog’s appearance and applauded twice within the minute he was on stage.

Upon the arrival of the nobility, the villagers welcome them, offer them drinks and perform several dances.

These dances were performed by students in the Dance Department.

Austin Duclos and Sarah Gregory, in particular, did an exceptional job during their performance of the “Pas de Deux” during th Friday performance.

Bathilde is especially drawn to Giselle and, touched by her kindness, gives her a necklace before their departure.

Albrecht’s true identity is uncovered by Hilarion, a gamekeeper who is also in love with Giselle and has been suspicious of the newcomer since his arrival.

Ramani Rosa, who performed as Hilarion during Friday’s performance, was especially energetic in his role and captured the character’s emotions exceptionally well.

After discovering Albrecht’s sword and noble attire, he presents them as proof to Giselle of her lover’s dishonesty and calls the nobles back.

At this point, Albrecht is forced to expose himself and greets Bathilde as his betrothed.

Heartbroken, Giselle throws herself into a dancing frenzy, only stopping when her heart gives out from exhaustion.

The death of Giselle sends the village into deep mourning.

The second act of the show is much darker than the first, and it takes place in the dark woods where Giselle is buried.

Here, the audience sees the Wilis, which are spirits of unwed, broken-hearted women seeking revenge.

Late at night, they summon the spirit of Giselle to join their group and haunt the forest.

The Wilis then catch Hilarion mourning the death of Giselle at her grave.

Their queen, Myrtha, orders them to force Hilarion to dance until he dies of exhaustion.

Then, Albrecht appears to grieve at Giselle’s grave.

Giselle, still filled with love for Albrecht, forgives him.

The Wilis, however, sentence him to death despite repeated pleas from the pair to spare his life.

Ultimately, the power of Giselle’s love saves Albrecht’s life and the Wilis depart, leaving Giselle to say goodbye to Albrecht and peacefully return to her own grave.

While the Friday night performances by leads Megan Carnuche (Giselle) and Justin Michael Hogan (Albrecht) were incredible and portrayed a lot of emotion, the Wili dancers are also to be commended for their skill and elegance throughout the second act.

Overall, the choreography provided the perfect medium for the dancers to showcase their impressive talents and engage the audience.

The presence of the orchestra added immense value to the production.

Under the direction of Moser, the orchestra gave an engaging and lively performance, providing the perfect link between the performers on stage and the audience members.

Hopefully the Mercyhurst Dance Department and Civic Orchestra will continue to partner with one another for future performances.

Proceeds from the ballet went to SafeNet and the Jenni-Lyn Watson Memorial Scholarship Fund in remembrance of a deceased Mercyhurst Dance major.