‘The Merciad’ Then and Now: Celebrating 90 Years 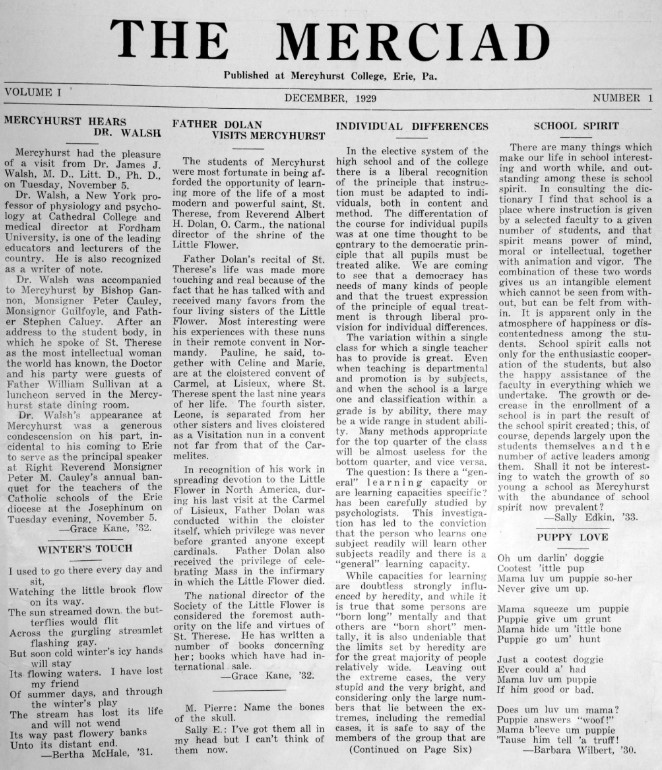 Three years after Mercyhurst College opened its doors, a group of students started a student-run newspaper, The Merciad. Now, 90 years later, we look back and reflect on the long legacy The Merciad has had on campus.

Beginning in Dec. 1929, the first issue consisted of 12 pages in black and white. The first issue had nine student editors and featured sections such as news, art and a society section along with local ads to start off the newspaper’s run. The Merciad serves as a student voice on campus, where the Mercyhurst community can read about the happenings of cam-pus, notable events and student opinions.

Brian Sheridan, M.A, senior lecturer and chair of the Communication department, worked on The Merciad as a student at Mercyhurst first as a writer, and then Editor in Chief his junior and senior years of college from 1983 to 1987. Notable milestones during Sheridan’s time include being the first staff to use a computer to partially produce the paper.

“We had one computer and only myself and two other editors were allowed to touch the computer,” Sheridan said. “We still had to print out the paper and do paste ups. We had to wax the papers and print them out on a sheet and then those were sent to the printer company. Then they were shot and typeset and then printed.”

Sheridan also notes that The Merciad was the first newspaper to print the Far Side comic in Erie. Throughout the past 90 years The Merciad has undergone numerous changes, changing lay-outs, categories and page sizes.

Some interesting features of early Merciad issues include graduating classes being small enough that every senior was featured in The Merciad, a section dedicated to alumni news and news specific sections dedicated to each class. The paper also served as a resource for the Erie community and Erie residents could get a yearly subscription for The Merciad for $1.

The one constant that has remained has been the publication of the paper. Since 1929, The Merciad has published papers every semester to the present day.

“Seeing that [The Merciad] continued over the many years and being part of this tradition is important,” Sheridan said.

Some notable moments in the paper’s history include an issue the day after 9/11, covering university president inaugurations and covering the first ever Hurst Day.

The Merciad has also had many homes on campus, from Baldwin to Old Main to Zurn to its current location in the Audrey Hirt Academic Center, The Merciad has been on every corner of campus.

Ryan Palm, associate vice president for Advancement, was also involved with the paper during his time here at Mercyhurst and served as sports editor his sophomore through senior year from 2004 to 2007. Some of Palm’s favorite memories with the paper include getting to cover historic sports moments in Mercyhurst history, such as when our women’s ice hockey team made three consecutive NCAA appearances.

“I was with the Merciad at a time where technology was really growing rapidly —so the paper became less about recapping who won the games and more about trying to find interesting stories to tell beyond the wins and losses,” Palm said.

The Merciad has long been an avenue were students can raise concerns over issues on campus, show appreciation for events well done and bring attention to the ins and outs of everyday stu-dent life.

“The paper has been positive much of the time, but also not afraid at times to push the envelope and challenge the school on issues that were of critical concern to the students,” Palm said.

Bill Welch, professor in the Intelligence Studies department, served as the advisor for the paper from 2002 to 2016. “It serves as a historical document of sorts. It is a reflection of what this little society is all about, the microcosm here,” Welch said.

Now done completely digitally, The Merciad still has a staff of nine student editors and is available in hard copy and on-line on Facebook, The Merciad website, and on Issue.com. The Merciad now prints nine issues a semester.

While technology has advanced, the publication of a physical student-run and focused newspaper proves to be an invaluable resource and historical record for Mercyhurst University.

As the university continues to evolve and expand, we can hope to see The Merciad evolve along with it.