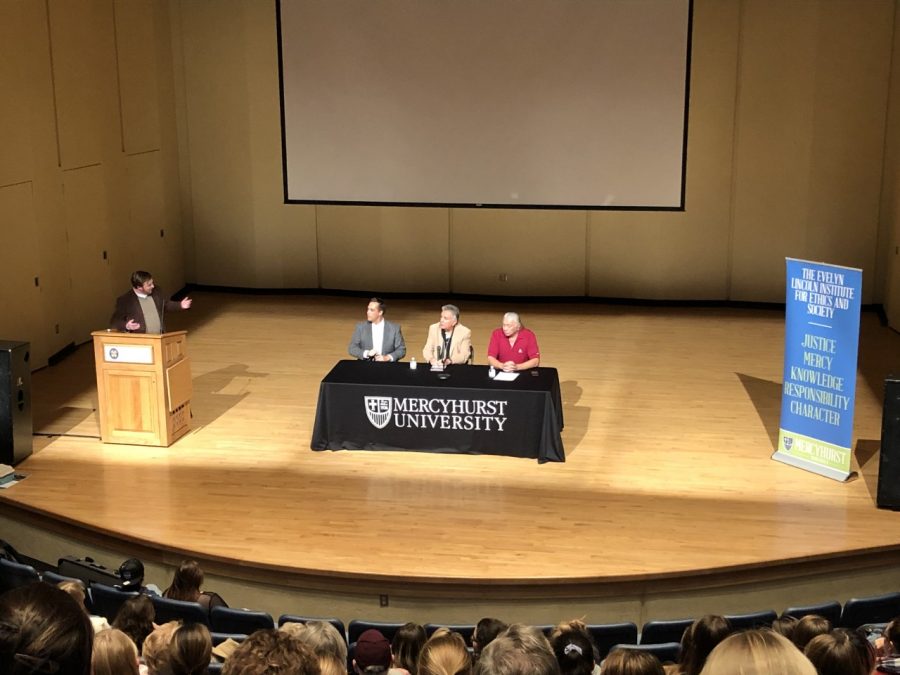 On Nov. 20, in honor of Native American Heritage Month, Mercyhurst hosted a film screening of “Lake of Betrayal: The Story of Kinzua Dam” followed by a panel discussion. The event was co-sponsored by the Evelyn Lincoln Institute for Ethics and Society (ELIES), Mercyhurst Anthropology and Archaeology Department and Mercyhurst Thomas B. Hagen Department of History.

“Lake of Betrayal: The Story of Kinzua Dam” is a 2017 documentary film by and about displaced members of the Seneca Nation. The film “reveals an untold story from American history—a one-sided battle pitting an impoverished Native American nation against some of the strongest political, social and commercial forces in the country as they fought to protect their sovereignty,” according to Toward Castle Films.

The construction of the Kinzua Dam, which is located southeast of Erie in Warren County, PA, began in 1960 and was completed in 1965. It was designed in order to prevent flooding in Pittsburgh downriver on the Allegheny River and to provide hydro-electric pow-er.The construction of the dam condemned 10,000 acres of the Allegheny Reservation, belonging to the Seneca Nation, as promised to them in a treaty signed by George Washington. As a result, and despite protest, 600 Seneca were displaced from their homes and communities.

The showing and discussion of the film and its significance was a combined effort from Verna Ehret, Ph.D., Director of ELIES and assistant professor of Religious Studies, Ben Scharff, Ph.D., chair of the Thomas B. Hagen Department of History and Edward Jolie, Ph. D., assistant professor of Anthropology/Archaeology. Jolie is an enrolled member of the Muscogee Creek Nation of Oklahoma and his specialized field of study is in the interaction of cultural identities and Native American-anthropologist relationships.

The screening coincides with the month of November, which is Native American Heritage Month, in order to address and celebrate the month, especially, according to Jolie, in light of the current government’s failure to do so.

Last year Mercyhurst hosted a similar event, a screening of “Rumble: The Indians Who Rocked the World,” also in honor of Native American Heritage Month and in acknowledgment of the contributions of Native Americans to the rock and roll genre.

“We felt it was a good success and a good opportunity to pro-mote discussion, and so we pursued that line of thinking this year,” Jolie said. This year the panel featured Jolie and citizens of the Seneca Nation, Dennis J. Bowen, Sr., and Stephen Gordon. Gordon was among the displaced Seneca and is featured in the film, and has written a book on the topic. Bowen is an activist and former Tribal President of the Seneca Nation.

The panelists highlighted the trauma inherent to the experience of forced removal and issues of social justice as they pertain and continue to pertain to Native Americans.

“I participated in this movie, and I guess I’ve viewed it probably about 10 times, and every time I see it it affects me,” Gordon said in the panel. “It affects me because I see the pictures of my grandfathers, and grandmothers so when I see these smiling faces up here, it reminds me that the Indian community that I lived in, it was about those people.”

Bowen emphasized that the events surrounding Kinzua Dam do not exist in a vacuum but rely on hundreds of years of history, as such events continue to shape history.

The topic of Kinzua Dam is especially relevant given its close proximity and relatively recent construction. “‘Lake of Betrayal’ seemed like a logical choice as it deals with the construction of the Kinzua Dam in the 1960s and more or less takes place in our own backyard,” Jolie said.

“It should bring home for a lot of people today that the protest over the Dakota Access Pipeline, these aren’t things that came out of thin air, there’s a deep long history,” Jolie said.

The event was well attended and well received. Jolie hopes attendees will continue to think about the continued significance of Native American history in our nation today.