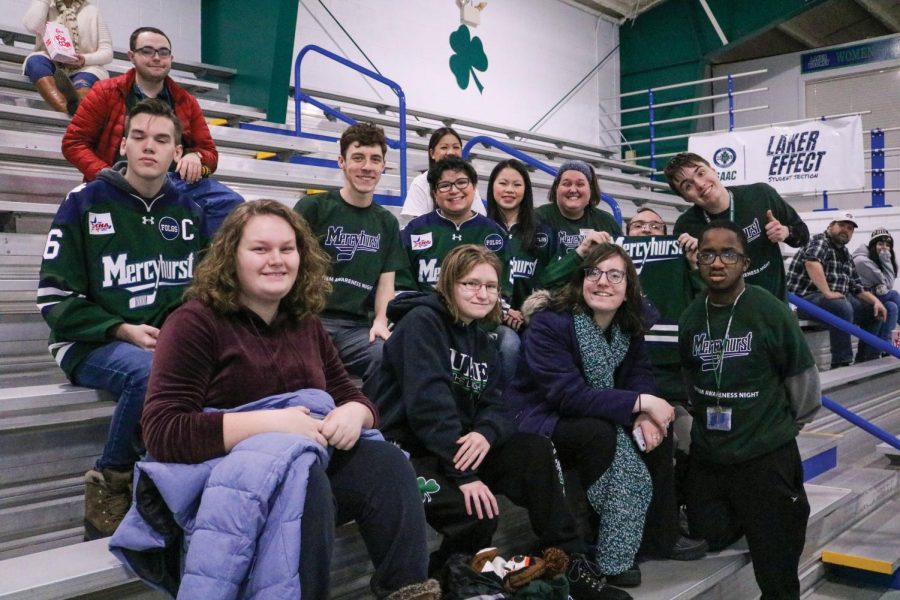 Students in the AIM program and faculty show their Laker Pride by supporting the women’s hockey team against Penn State.

On Jan 18. the Mercyhurst women’s hockey team tied 1-1 against Penn State on home ice. Sophomore Emily Pinto scored for the Lakers during the first period, and after Penn State scored in the second period, the Lakers held the Nittany Lions scoreless through overtime play.

Almost all team members of the team volunteer as mentors for AIM students on campus. “Our partnership started way off the ice and evolved into this great event,” McGarrey said. Some of the players’ biggest fans are their friends from the mentor program, as was evident by the fans on Saturday.

According to McGarry, this match was designed to foster community awareness and create new experiences for many of the spectators. The goal of the match was to create an “autism friendly” environment at the game, he said. Noise-canceling headphones and other small comforts were provided to allow maximum for attendance.

Many students in the AIM program had expressed concerns that hockey would be too loud and aggressive but were pleasantly surprised by the atmosphere and consideration for their needs. McGarry also emphasized publicity efforts as central to the event. Many of the students in AIM were vocal on social media, and the event was spread through campus in other various ways.

At the game, students in AIM and volunteers helped with t-shirt sales and giveaways. McGarry even found a sponsor for the event, an energy bar company called Spectrum Bakes, whose products are made entirely by individuals with autism. The bars were handed out at the game along with the other merchandise.

On top of publicity efforts, AIM students had a hand in the game itself. Junior Hospitality Management major June Durkee was able to announce the starting lineup. “I was able to do a few practice runs days prior to the event with the sheet of players’ names to refer to,” Durkee said.

“This gave me the chance to practice how loud I need to project with the microphone. Haleigh Giebel who also plays the background music helped me set up so I could get the feel of other noises around me.”

Another AIM student got to drop the puck to begin the game. Senior Hospitaltiy Management major Matthew Kuzdzal was the student given this honor. McGarry said the game was a hit, attributing its success to the atmosphere and involvement of the community. He also noted the funds raised towards AIM programs. Durkee agreed.

“I thought the game and overall atmosphere was a success for our first time ever hosting an event like this,” Durkee said.

“It was neat to see how there were many supporters not just for the hockey team, but also showing their love and support for the AIM Program. It was very powerful seeing our girls wear jerseys that sported puzzle pieces in all shades of blue to symbolize autism. That would not have been possible without Brad McGarry and his wonderful team of staff,” she said.

“I loved being able to attend and participate in this event and am hopeful that more opportunities like this can shed more light on autism as a whole,” Durkee said. McGarry praised the collaboration between AIM and Mercyhurst’s athletic teams.

“At Mercyhurst, our star athletes hang out with our autistic population,” McGarry said. “Show me another college that does that.”

McGarry said he remains optimistic about the future of autism awareness at Mercyhurst.

The women’s and wen’s hockey teams plan on making a weekend out of the event in the future, he said. The Lakers return to home ice on Feb14. vs the Robert Morris University Colonials.