A Mercyhurst College alumnus has returned to the college to lead the new public health department on campus.

David Dausey, Ph.D., is the director of the newly created Mercyhurst Institute for Public Health. This program offers a public health major to undergraduate students.

Dausey, who graduated from Mercyhurst in 1997 and received his master’s and doctoral degrees from Yale University, explained his reason for returning to the college. 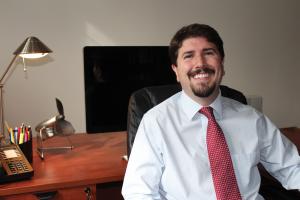 He said the college administration consulted Dausey about starting a public health program. After discussing the program with the college, “I decided it would be a great program to lead,” said Dausey. “It’s nice to come back as an alumnus and be involved at my alma mater.”

The intelligence studies and archeology programs at Mercyhurst are growth programs, and “Dr. Gamble is hoping the public health program will be a major growth program for the college,” he said.

Public health is expected to be a growth program because it is an “extremely popular major in other colleges and universities,” Dausey said.

Students can begin taking public health classes beginning this winter. The first class offered is Foundations of Public Health, which is open to all students.

The Bachelor of Arts track will focus more on leadership of health care and public health policy. The Bachelor of Science degree will be for students planning to work in medicine, conduct lab work or work in a pharmaceutical lab.

In addition to the two undergraduate degrees, Dausey hopes to add a public health graduate program in the future.

“I think it would surprise students based on their interests how many of them could do a public health major,” he said. “Right now if somebody’s interested, they could go and change their major to public health. Public health still allows you to pursue your initial interest.”

Freshman Gaelin Carrig is undeclared, but she is considering public health as a major because it combines the two subjects she is interested in most: math and science.

“I am taking the class that is being offered in the winter term, and hopefully that will give me some more options to explore,” Carrig said.

As the department grows, Dausey said there will be a need to hire new faculty, which could be necessary as early as next year.

Students interested in learning more about the major can go here.