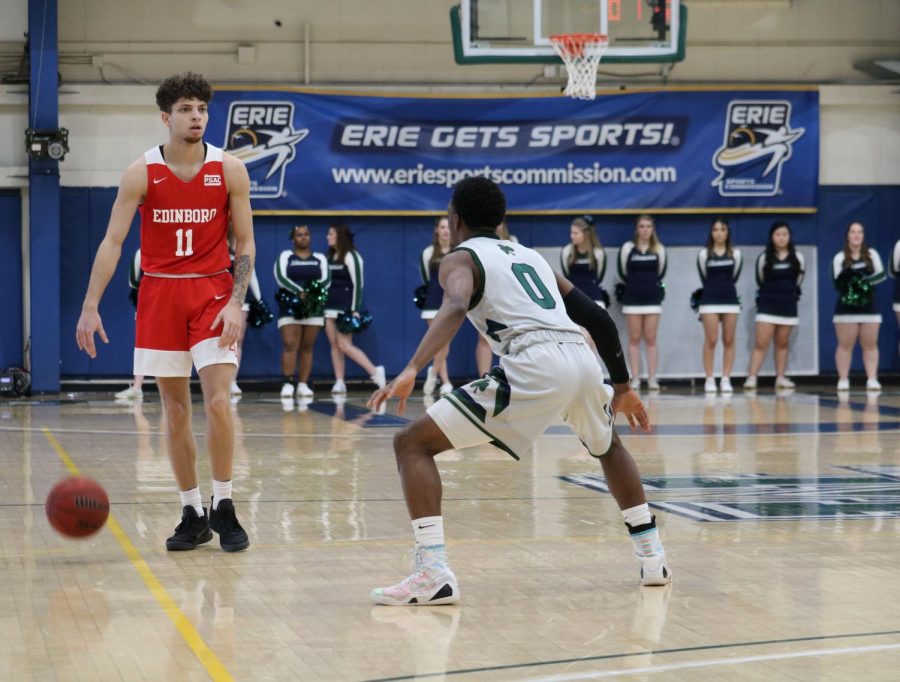 Mercyhurst took the early lead despite the aggressiveness that Edinboro showed from the start.

The Lakers dominated off the bench, outscoring the Fighting Scots 32-19. Mercyhurst also held a 44-28 edge in the paint.

Gross lead the Lakers in rebounds (10) along with junior guard Zach McIntire (five). Mercyhurst put up 47 points in the second half with Edinboro managing only 33 points over the final 20 minutes.

Mercyhurst women’s soccer freshman Bethan O’Donnell is just one of many student-athletes who got to celebrate her achievements by walking onto the court during halftime. “It was really cool to be recognized at the basketball game. It’s rewarding to see that our hard work off the field gets noticed too,” O’Donnell said.

An undeclared major, O’Donnell earned a 4.0 GPA for the fall semester while in season. “So many times people just see us as athletes and they don’t realize that we put in as much work off the field as we do on the field,” she said.

The athletes were greeted by athletics director Brad Davis at half court along with other faculty members, who congratulated each individual student-athlete.

After the game, Edinboro currently has an overall record of 5-13 and 2-11 in PSAC conference play.

After the game, when asked what worked for the Lakers offensively, Mercyhurst’s coach Gary Manchel said that he thought the players were more open this game compared to past games.

Manchel believes that in order for the Lakers to be more successful on defense, they needed to play a complete game and force turnovers to prevent the other team from completing shots. He thinks that this will help the Lakers in close games when they are not scoring.

Manchel also cautioned that if the Lakers did not play great defensively, then they’d have no shot against IUP on Saturday. The Crimson Hawks were ranked fifth in the country and had sustained just one loss all season to Shippensburg. However, on Feb. 1, the Mercyhurst Lakers bested IUP 68-62.

This game also honored the memory of the late Kobe Bryant with fans dressing in the LA Lakers’ team colors of yellow and purple.

The Lakers’ next PSAC game is scheduled at Seton Hill University on Feb. 5 at 7:30 p.m. The next home game at the Mercyhurst Athletic Center is Saturday, Feb. 8 versus the Clarion University Golden Eagles at 3 p.m. The Golden Eagles currently hold a total record of 4-17 with 3-12 conference record.