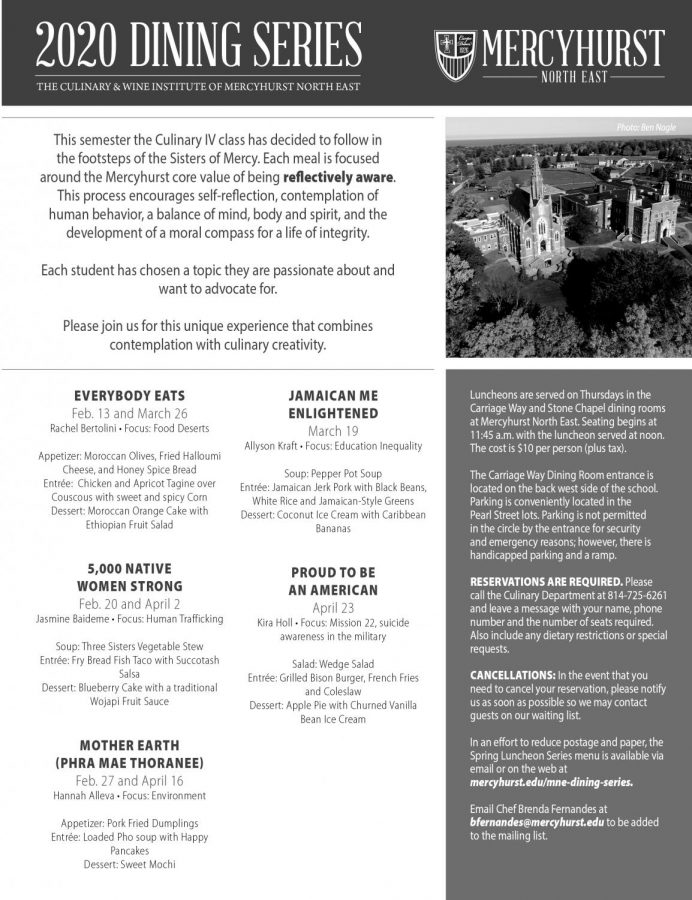 Students in the Culinary Arts program at Mercyhurst North East are hosting their Spring Dining Series, consisting of eight luncheons on Thursdays this spring. Open to both the Mercyhurst communities and the public, these luncheons have a special twist to promote the core concerns of the Sisters of Mercy.

Besides creating a menu, each student in the Culinary IV class has chosen a social justice topic to advocate for with their meal.

Chosen topics include prevention of suicide in the military, countering human trafficking and highlighting food insecurity.Senior Rachel Bertolini will kick off the series on Feb. 13 with her menu “Everybody Eats.” Bertolini is making a Moroccan-style meal including halloumi and olives, apricot tagine and Moroccan orange cake.

Bertolini has chosen to high-light the social issue of food deserts, something that is a common problem in Erie. These are areas with limited or no access to affordable food, especially in areas with low-income populations that may not have reliable transport. The opposite is a food oasis, an area with higher access to supermarkets and fresh foods.

Because of poverty in Erie and across the world, the issue stood out to Bertolini.

“I chose poverty/food desserts because I feel that in a world with the means, there is no reason that anyone, anywhere in the world should be starving,” Bertolini said.

Because of her conviction that no one should go hungry, the idea of a social justice theme came about.

“Over Christmas break, I was watching a TV show about art and one of the contestants said ‘If you are making art and it doesn’t have a purpose then what is the point?’ So I thought that that was something I really wanted to bring to my meal,” Bertolini said. “I wanted to make it a social experience rather than just eating food. Once I brought the idea to our instructor, she loved it and decided everyone should be choosing social issues for their meal.”

On Feb. 20, Jasmine Baideme will continue the series with her menu “5000 Women Strong.” Her focus will be human trafficking, and she will be serving Three Sisters vegetable stew, fish tacos and a blueberry cake dessert.

In what is a particularly complex issue, Baideme will focus specifically on trafficking of Native American women.

“My idea came from my class-mate Rachel’s idea originally, when she wanted to show two different styles of food eaten from the same country. Once she said that, I began to think of what I personally wanted to bring awareness to,” Baideme said.

“I am a Native American Indian and for the last couple of years there has been an epidemic of Indigenous women going missing and/or murdered on and off reservations that result in little to no investigation. Back in 2011 an artist started the Red Dress Project, with a dress symbolizing what the women were last seen wearing. Red is the color of awareness. There have been more than 5,000 cases of this happening and it being pushed under the rug. My meal is to bring awareness to this epidemic and for my lost sisters who haven’t made it home.”

Hannah Alleva will follow her on Feb. 27, serving a menu for the environment. “Mother Earth” will feature pork fried dumplings, loaded Pho soup and sweet mochi.

“Jamaican Me Enlightened” is the brainchild of Allyson Kraft, who will serve a meal of pepper pot soup, Jamaican jerk pork with black beans and coconut ice cream with Caribbean bananas.

“When deciding on a menu topic, I was lost,” Kraft said. “Once I found out we were allowed to be more open to other parts of the world as opposed to years past, (which were mostly European and regional American cuisine), I knew immediately I wanted to do a meal of Jamaican food.”

Her luncheon is focused on the issue of education inequality.

“I chose education inequality as my social issue because it happens everywhere. I myself struggled to return for my final semester due to finances, and I want others to understand that even in such a prosperous country, there are difficulties to receive an education, especially in upper level schooling.”

Finally, Kira Holl will close out the semester with “Proud to be an American.” Served on April 23, her American-style menu will be a wedge salad, a grilled bison burger and apple pie with churned vanilla bean ice cream.

Holl seeks to highlight Mission 22 and the tragedy of suicide in the military.

Meals are served at 12 p.m. in the Carriage Way and Stone Chapel Dining Rooms on the Mercyhurst North East campus. The cost of the three-course meal is $10, plus tax.

Reservations are required for all meals and can be made by calling 814-725-6261. Full menus and more details can be found at https://www.mercyhurst.edu/sites/default/files/mne_spring20-menu.pdf