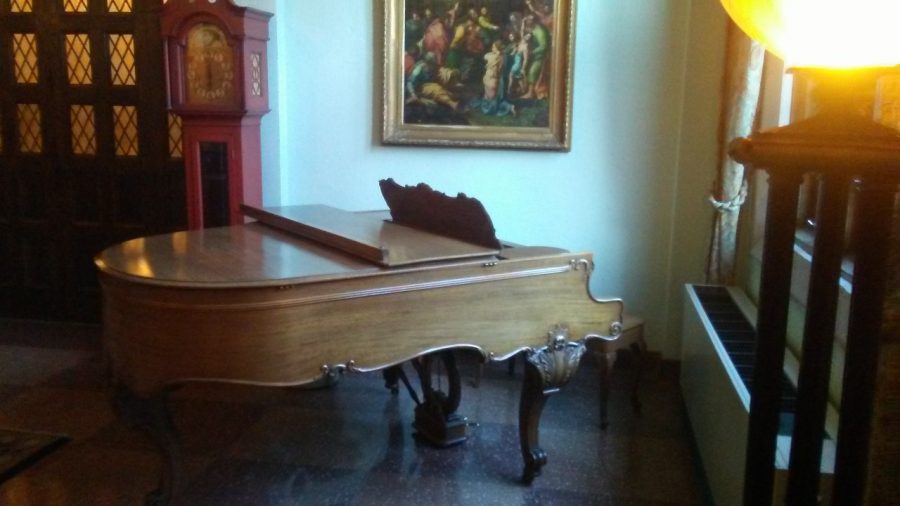 The baby grand piano in the chapel foyer in Old Main is being replaced.

Donated to Mercyhurst University in 2011 by Bill and Susan Kindler, the piano is no longer in playable condition.

While the costs to repair the instrument have proven prohibitive, the piano was offered to any member of the campus community who wanted it as a furniture piece, as long as he or she was able to pay for the instrument’s transportation costs.

The piano that will replace it is a donation from James Zurn, former chairman of Mercyhurst’s Board of Trustees.

When President Michael T. Victor learned that Zurn wanted to gift the piano to the campus, Victor got in touch with Nathan Hess, D.M.A., chair of the D’Angelo Department of Music and pianist, asking him to test out the piano and recommend a new location for it on the Mercyhurst campus.

Hess calls the new piano a “beautiful instrument” and says he suggested it should go into the chapel foyer.

Plans were immediately set in motion to move the instrument to its new home.

The new piano is a 1908 mahogany Mason & Hamlin piano.Hess describes this manufacturer as “one of the last great American piano companies.”

Mason & Hamlin is a piano company that has been based in Havermill, Massachusetts since 1854.

The new instrument will arrive at Mercyhurst on Feb. 7.

Getting it on campus will be a joint effort by Thomas Fabrizio, the Facilities Manager at Mercyhurst University, and Doug Jones, a local piano mover.

Those interested in seeing the new piano can stop by the chapel foyer in Old Main sometime next week.