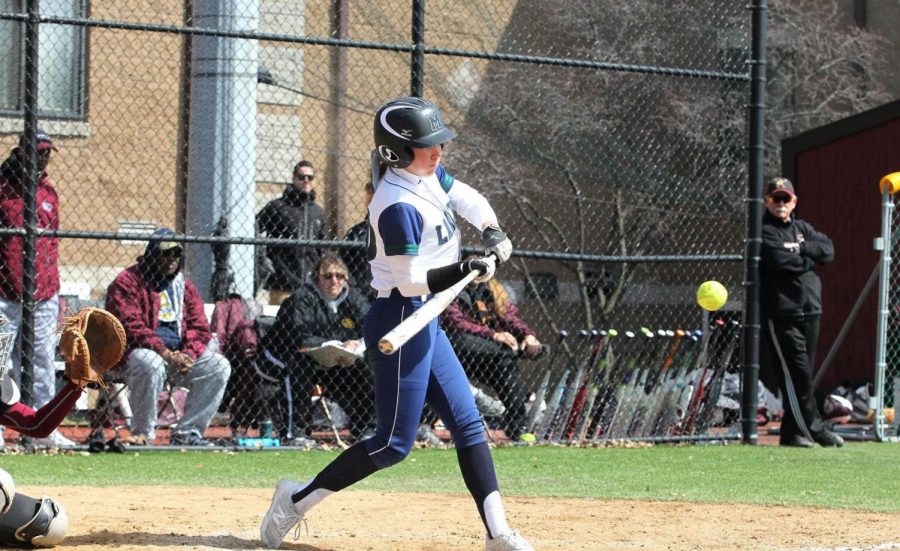 Freshman Madison Fry, shown here in a 2019 game against Gannon, led the Lakers to a 6-2 win against the University of the Sciences in Mercyhurst’s second game of the Florida spring break trip.

During the first day, the Lakers came out swinging, winning both of their games. For the first game, they played against the Concordia College Clippers and won 4-2. The second game was against the University of Sciences Devils. The Lakers were able to rally another win with a score of 6-2.

Against the Clippers, the Lakers took the lead in the second inning when junior Sarah Koscho drove home sophomore Cheyenne Hindman. The Clippers came battling back in the sixth inning to take a 2-1 lead.

Freshman Marissa Cartellone picked up the win on the mound during the first game. She was able to strike out two batters and only allow four hits. These first few games showed both the opposing teams and fans a glimpse alike what this year’s roster is capable of.

In addition, it also solidified to the new and returning Lakers what the team can accomplish together, Hindman said. “We have a lot of new players this year and these games gave us an opportunity to get comfortable with each other and prepare for the season ahead,” she said.

In the second game against the University of the Sciences Devils, the Lakers locked away a 6-2 win early. The Lakers’ bats were on fire during the second and third innings. Koscho hit a home run, sending home Hindman and freshman Allison Dejidas. LeGendre followed with a doubled to send home junior Natalie Graff. Junior Jenna Balducci, Koscho and LeGendre all had two hits while Hoffner, Dejidas, Graff and freshman Madison Fry each had one hit.

Both Hindman and Hoffner performed well at the plate and shared the win on the mound, striking out five batters, allowing five hits and two runs.“If someone struck out, the next person came up with a clutch hit,” Hindman said. “We played selflessly and leaned on each other.”

The Lakers split the double-header the second day. They just got by the Kentucky Wesleyan Panthers, 3-2, but could not pull out the win over West Virginia Wesleyan, losing 10-0.

Hindman started the game against Kentucky Wesleyan by hitting a home run into left field. Shortly after, the Panthers came back to take the lead. Graff doubled down the left-field line to bring in Koscho before Fry singled up the middle to score in Graff. Egelston and Koscho went two-for-three at bat while Dejidas and Balducci had one hit each.

However, Fry was able to go three-for-three at-bat, Hoffner two-for-three and Koscho had one hit. On March 3, the Lakers split the doubleheader. The Lakers blasted Holy Family with a 10-2 win but were shut out against the University of Mary Marauders 3-0.

The Lakers ended up with six wins and four losses over the five-day period that they played. “We showed daily improvement this week in Florida,” coach Leanne Baker said.

“Each game we were able to grow, whether the result of the game was a win or a loss.”

The Lakers said they are excited to continue to see results back up North during throughout the rest of their season. “It [the Florida trip] gave us a good opportunity to see what we need to work on, but also showed us what we’re capable of doing and I’m really excited to see what we can continue to do as a team up North,” said Fry.

The Lakers’ first PSAC season game will be played on March 14 at the Mercyhurst Softball Field, time is still TBA. They will compete in a doubleheader against the Clarion University Golden Eagles.