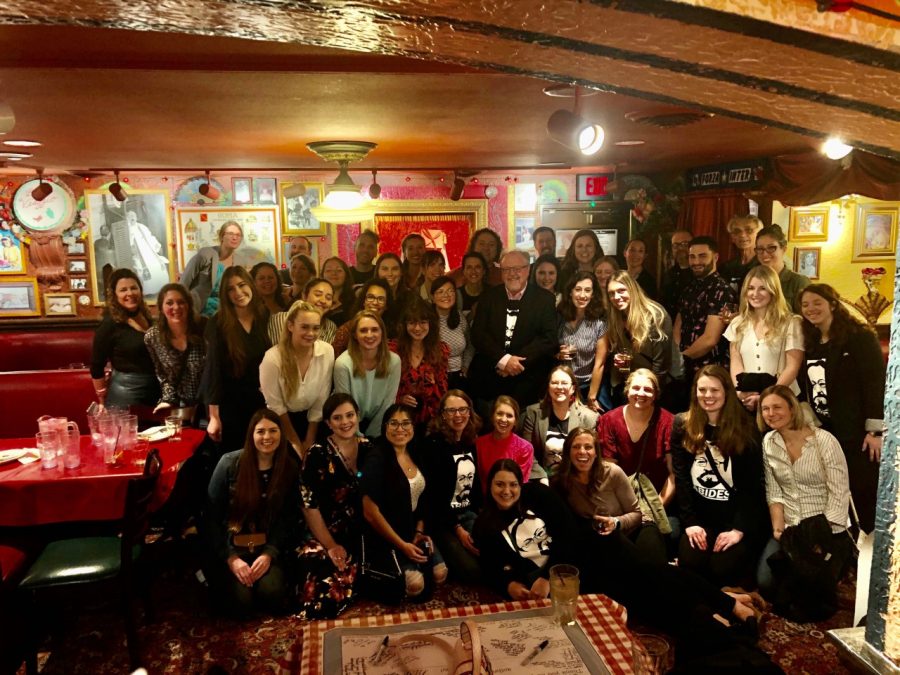 “It’s a pretty big deal and I’m proud of it but mainly because of the wonderful students I’ve had all these years,” Dirkmaat said. “This not only reflects the students but also the research that we do and the writings that we’ve done with the program.”

Mercyhurst’s forensic anthropology alumni rallied behind Dirkmaat when they heard the announcement from the AAFS of the institution of the Outstanding Mentorship Award. The winner was chosen based on what students write about the successes of that individual. Dirkmaat was honored to see the support from the students he has had over the last 28 years as a professor.

“They wrote very nice things,” Dirkmaat said. “We usually have a Mercyhurst gathering at these meetings, and I’ve had a lot of students over those 28 years, so we celebrated.”

He considers it a nice award due to it including both undergraduate and graduate students. Dirkmaat was aware that he would receive the Outstanding Mentorship Award at the AAFS meeting, but was surprised in receiving the coveted Stewart Award.

“It was definitely a surprise, and it reflects the work I’ve done personally, but it’s mainly a bigger reflection of our program and what we’ve been able to do,” Dirkmaat said. “Maybe they said the old guy needs an award.”

The annual AAFS meeting was held in Anaheim, CA where Mercyhurst forensic scientists came together to share their expertise with others at the conference as well as support Dirkmaat’s achievements. Four Mercyhurst faculty and 12 graduate and undergraduate students delivered presentations at the AAFS meeting as well.

According to a press release from Mercyhurst University, the Stewart Award, (formerly known as the Physical Anthropology Section Lifetime Achievement Award) “recognizes remarkable lifetime contributions to the field of forensic anthropology.” This award is not given out every year, so it is a very high honor for Dirkmaat to receive.

In the 15 years of Mercyhurst’s Masters program, 26 of those individuals have received a Ph. D. Many of Dirkmaat’s students are also leaders of their own programs, so the model here at Mercyhurst is being extended to other programs.

According to a press release from Mercyhurst University, “Dirkmaat has conducted more than 600 forensic anthropology cases, including nearly 100 field recoveries involving the processing of evidence from human death scenes, and the comprehensive forensic anthropological analysis of over 300 sets of human remains.”

He has used his expertise and the help of his students to work on recovering remains from many significant mass fatalities such as Pittsburgh’s USAir Flight 427 crash in 1994, the island of Guam (KAL Flight 801 crash in 1997) and more. After the tragedies of September 11, 2001, Dirkmaat served as the primary scientific advisor to Somerset County Coroner Wallace Miller in the recovery and identification of victims of United Flight 9.

Dirkmaat credits Luis Cabo-Perez, Ph. D., Director of the Forensic and Bioarchaeology Laboratory, as his “righthand man” who has been part of Dirkmaat’s team since 2003.

Cabo-Perez himself finds Dirkmaat very deserving of the award, citing his influential work as why he won along with his contributions to Forensic Science.

“Along the years, I have been lucky enough to meet a few people who have been very influential in their fields,” Cabo-Perez said. “However, Dr. Dirkmaat is the only person I know who has textually changed the definition of his whole scientific field through his work.”

He sees his work in the field to be quite groundbreaking, changing the very definition of the work they do. “

He has changed the fundamental goals of the field, its methodological and conceptual framework and the materials and type of data it analyzes,” Cabo-Perez said.