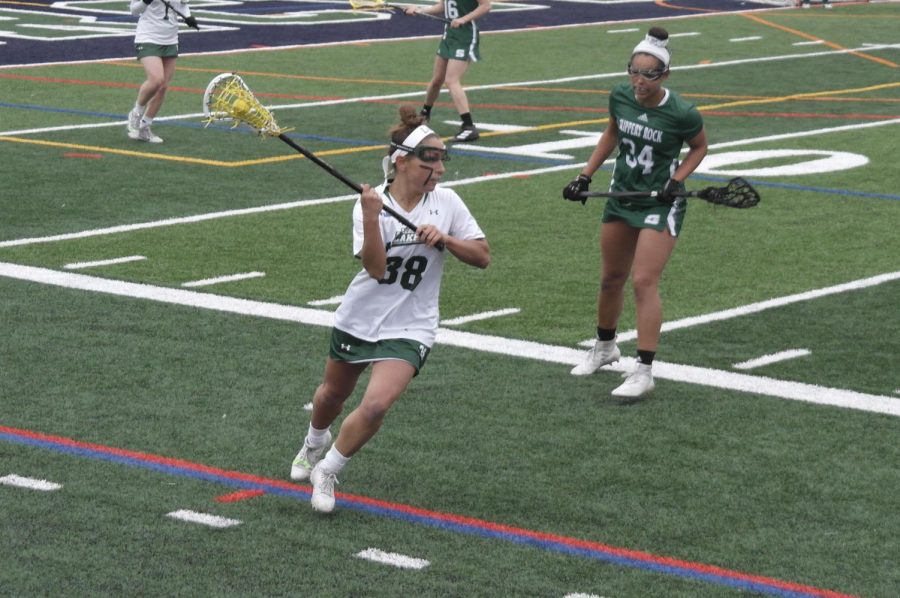 Starting the game out strong, the Lakers scored a goal just 30 seconds after the start of play with a goal scored by junior midfielder Payton Cook. Cook had two goals and one assist throughout the game.

On defense, the Lakers dominated the game in the first half. Sophomore goalie Kaitlyn Lippert only let two goals go past. Lippert believes that fast ball-movement, great communication, and an overall team effort was what worked well in the game.

With 12 goals scored by the Lakers in the first half, senior defender, Kira Kolb, says that it was because of a tactical, well-played attack that they had prepared in practice. “Offensively we attacked their zone defense with pristine ball movement. We found the right cutters in the middle to put it in the back of the net. We know that they are a physical team on defense and we were prepared to get pushed around a little but that did not stop us from continuing to attack,” Kolb said.

While the Lakers dominated the first half with a 12-2 lead, Slippery Rock won second half 2-4, ending the game 14-6.

The Lakers had 20 shots throughout the game while “The Rock” had 12. Senior Emma Hubert, senior Brenna Fosco, and junior Julia Rescott scored three times each. Cook and Sophomore Marissa Comerate each scored twice, and junior Paige Cocina scored once. Senior Lacey Netti lead the Lakers with her two assists.

With the team winning 14-6 on their home-opener, many recognize the win as a true team effort and one step closer to a great season. “Yesterday was a great team win. We did things right on each end of the field and collectively worked hard to get the win. We prepared well for this game and executed when and where we needed to,” Lippert said.

Kolb and Lippert are hoping that the team can work their way to the PSAC championship in the 2020 season and make an appearance in the NCAA tournament.

According to Lippert, the team is very driven and works hard every day in order to achieve the goal. Kolb agrees, as well as she believes it is an achievable goal. “This is a highly achievable goal for our team. We have tenacity and we go extremely hard in practice every single day. Everyone is also on the same page of our expectations,” Kolb said.

Unfortunately, the women’s lacrosse team will not be able to finish the season that just began. On March 12, the NCAA decided to cancel all winter and spring sports due to precautions and preventative measures over the COVID-19 outbreak.

Beginning and ending the season on a high note, the team’s big home opener win was their first and last game of the 2019-2020 season.