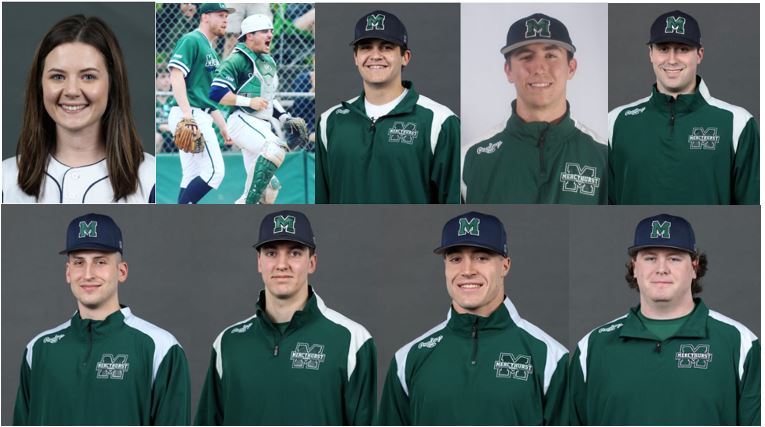 Student athletes work hard to achieve their personal bests in sports and academics. They represent their school for four years with commitment and love for their sport.

Senior Games of each season recognize Senior athletes for their effort and dedication. With the COVID-19 crisis, spring Senior athletes everywhere lost this event and countless opportunities to play.

Despite these circumstances, the Mercyhurst community and the Merciad want to recognize these Lakers. This week we celebrate softball and baseball, two popular spring sports.

Congratulations to all the following Seniors. We are proud to say you represent Mercyhurst University.

#10 on the softball team from Mississauga, Canada, Legendre played four years and became a leader on the team. She started in every game she played (37 as a sophomore, 34 as a junior and 16 in her senior season). As a junior she had 25 hits and 2 homeruns as well as 1 triple and 4 doubles. In the short time of her senior season, she already recorded 3 doubles. Legendre will graduate with a degree in Political Science and a minor in French.

Her favorite memory of softball was traveling with her team and playing with them in Florida during spring break. After graduation she will attend graduate school at Nipissing University and become a French teacher. Emma wishes that her parents, Paul and Christine Legendre, could have escorted her onto the field for her Senior Game.

As a Catcher from New Springfield, Ohio, #3 Snyder had a successful career on the Mercyhurst baseball team. His overall career included playing 36 games and starting 35 of them. He had double digit put-outs in 17 games. He scored 20 runs, batted 6 doubles and hit 11 runs batted in (RBIs). He also helped his team to the World Series.

Snyder’s favorite memory was winning the super regional against the University of Charleston. He said that experiencing the energy from his teammates and seeing the excitement on their faces made that an amazing moment. Snyder will attend Lake Erie College of Osteopathic Medicine’s Medical Sciences program and hopes to attend medical school afterwards. Snyder wishes he could have shared his Senior Game with his parents Cathy and Barry Snyder.

#1, an in-fielder from Buffalo, New York, Cecere’s career really took off last season. He started in all 52 games, scoring 26 runs with 4 doubles and 18 RBIs. He had 9 multi-hit games and 4 games with multiple RBIs. Cecere will graduate with a major in Biology.

The #8 outfielder and pitcher from Youngstown, Ohio, Kapturasky had a successful career at Mercyhurst. During his 17 mound appearances in his junior year he achieved a pitching record of 0-1, meaning he achieved more outs than hitters did hits. He had 17 strikeouts that year as well as 3 assists and 3 put–outs in the outfield. Kapturasky finishes with 4 homeruns in his college career. Kapturasky will graduate with a degree in Athletic Training.

#17 on the team, this Buffalo, New York native had an impressive career as an in-fielder. Monti’s junior year saw him play in 17 games and start 6 of them. He had 98 put–outs and 14 assists that season, as well as a solid batting record of 11 walks to first base and 7 runs scored. Monti is majoring in Economics.

This pitcher from Youngstown, Ohio (#18) had a strong career on the mound. He pitched 53 total innings, including 4 entire games. Lucente finishes with 58 strikeouts on his record. As a freshman he earned a 2.78 earned run average, meaning he only gave up 2.78 runs per game. Between 2.50 and 3.00 is a high caliber pitching record for any league. Lucente will graduate with a degree in Sports Business Management.

Pitcher #19 from Waterford, Pennsylvania, Greggs had a good four years at Mercyhurst. He was a starting pitcher and pitched in 10 games with 16 total innings. Over his career he had 13 strikeouts and a 4.91 ERA in a league of highly competitive pitchers. Greggs will graduate with a Sports Business Management degree.

#22 from Butler, Pennsylvania, this in-fielder transferred to Mercyhurst’s main campus from Mercyhurst North East for his junior season. In the 2019 season, he appeared in 28 games and was a starter for 25 of them. Baranchak scored 18 runs and had 14 runs driven in.

Goonan was Mercyhurst’s #24 pitcher from Ayersville, Ohio. As a senior transfer student, Goonan never had a season on the Mercyhurst baseball team but has some highlights from his other college teams. He had 48 game appearances altogether with 79 strikeouts. His previous team finished fourth in the World Series.