Student shares his passion for unicycling

While some of us enjoy more popular hobbies such as reading, gardening, shopping and crafts, others enjoy hobbies that are quite out of the ordinary. 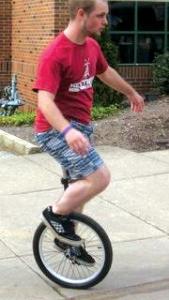 Contributed photo: Greenawalt can sometimes be seen riding his unicycle around campus.
Braden Greenawalt enjoys a hobby that is far from the ordinary.

He rides a unicycle, a one-wheeled, pedal-powered vehicle.

Greenawalt, a junior communication major, was inspired to ride the unicycle by a Super Nintendo game called “Uniracers,” which entailed racing unicycles.

After playing the game, he decided it would be fun to try riding a unicycle in real life.

He got his first unicycle for his 16th birthday.

“Riding a unicycle is way different from the video game,” Greenawalt said.
At first, the new hobby was extremely hard for Greenawalt. He fell a lot and received many scrapes and scars, but he is proud that he never broke a bone.

After about a month of practice, he seemed to get the hang of riding the unusual, one-wheeled instrument.

Once he got on the unicycle, it was easy for him to balance and ride, even though he admits that off the bike he is quite clumsy.

He has yet to learn any tricks on his unicycle, but it is one of his goals.

There are several different types of unicycles, and Greenawalt has three of them. 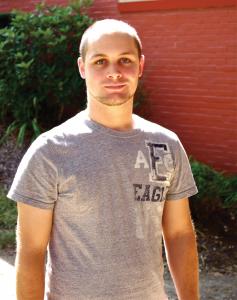 His first unicycle was an average unicycle for a beginner, which he got on his birthday, but he also has a smaller unicycle, which is one made specifically for tricks.

His third unicycle, called a commuter, has an incredible 36-inch tire and can go at a fast speed and take him long distances.

Many times, when thinking of a unicycle, the first thing that comes to mind is the circus.

Although he is not in one yet, Greenawalt has thought about joining a circus because he thinks it would be a great experience to get paid for doing something he truly enjoys.

When asked what his favorite part about riding a unicycle is, Greenawalt said, “I get a lot of attention. I mean if my hobby was puzzles, I probably wouldn’t be having an article written about me.”

More seriously, he added, “It’s also something different, which is what motivated me to learn.”