Suicide is the third leading cause of death among teenagers and the second among college students. The Active Minds club at Mercyhurst College is working to raise awareness of suicide and promote prevention of this horrible result of mental illness.

Active Minds at Mercyhurst is a student-based organization dedicated to spreading awareness of mental health issues.

Active Minds Adviser Missi Berquist said, “Active Minds at Mercyhurst has the distinction of being awarded as a Five Star Chapter by the National Active Minds organization. 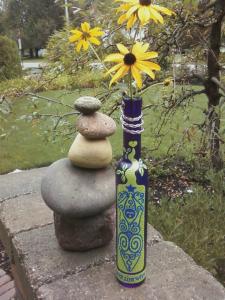 Contributed photo: The winner of the bottles will be announced at the &quot;Out of Darkness&quot; walk on October 9.

Active Minds at Mercyhurst was also recognized as the most active student organization at Mercyhurst for the 2010-11 school year.

The organization covers a wide array of mental health issues, but lately its focus has been on spreading awareness of suicide prevention.

More than “one thousand college students a year take their life by suicide,” Berquist said.

In order to help raise awareness of this problem, Active Minds at Mercyhurst is raffling off two hand-painted decorative bottles. The proceeds from one of the bottles will go directly to The American Federation for Suicide Prevention, and the proceeds from the other bottle will benefit the Mercyhurst chapter of Active Minds.
The bottles themselves spread the message of suicide awareness. Each is painted with the phrase “celebrate life with love.”

Raffle tickets for these bottles can be purchased in Old Main 112 at a cost of $1 for one ticket or $5 for six tickets.

The winning tickets will be drawn at the conclusion of the “Out of the Darkness” suicide awareness walk on October 9.

The walk, which is organized by the local agency Stairways Behavioral Health, will take place at the Rotary Pavilion on Presque Isle and is open to the community. Check-in is at 11:30 a.m. and the walk starts at 1 p.m.

“Active Minds at Mercyhurst has participated in the walk for the last three years,” Berquist said. 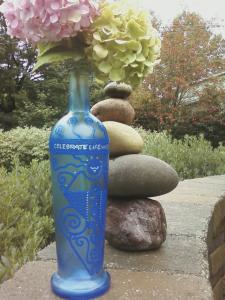 Contributed photo: The Active Minds club is raffling off bottles to spread awareness of mental illness and suicide prevention.

“The news will be there, and we want to get the college name out there,” Berquist said.

Active Minds chapters from Gannon and Penn State Behrend are also expected to attend the walk.

“(Mental illness) is more prevalent than we would like to believe,” said Berquist. “We want to get people talking about mental health concerns… to try to break through the stigma and the misinformation about mental illnesses.”

If students would like to join Active Minds of Mercyhurst and help spread awareness of suicide prevention and mental illness, they can e-mail Missi Berquist at mberquist@mercyhurst.edu.