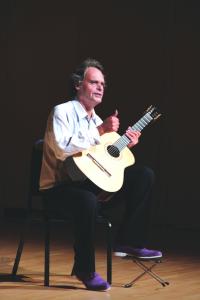 Jill Barrile photoFriday evening in the Walker Recital Hall, Mercyhurst students and music enthusiasts of the local community listened to one of the biggest names in the classical guitar world, Roland Dyens.

The hall was crowded, dimly lit and mostly silenced throughout the entire performance, for the sound of the guitar was soft.

The two-hour concert was a laid-back and melodious experience, consisting of several of the artist’s works that were dedicated to his closest friends.

The concert given at Mercyhurst was one of two that Dyens was hosting in the United States, the other one being in New York City.

Dyens is a unique guitarist in that he always starts his concerts with an improvisational piece.

Each of these spontaneous compositions are different for every concert. 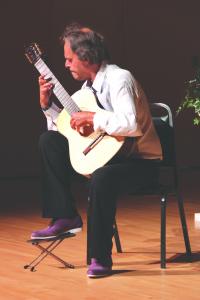 Jill Barrile photoIt wasn’t until after performing, however, that he confessed the piece was an improvisation, and he titled it “You and Me.”

Devi Subedi, a music major who traveled to Mercyhurst from Penn State, said, “He was so talented.
“The way in which he changes notes seems effortless, but it is actually very challenging.”

Following this piece, Dyens played several compositions, which he dedicated to important people in his life.

None of them were planned or listed in the program.

This is mainly because that in the world of jazz, the notion of a concert program does not exist.

Interestingly, Dyens rarely gives prior notice of the pieces he will play in recital.

This is his way of creating the best possible atmosphere by taking into account his audience, the acoustics of the hall and his desire to be true to his feelings at the moment that he actually interprets the music.

In between songs, after graciously accepting the audience’s applause, Dyens spoke to his audience members about the pieces he was playing and what inspired them.

One of the most touching was a slow ballad that he had written for his now 21-year-old daughter on her 8th birthday.

Another memorable piece that closed the show and earned him a standing ovation was a work inspired by wooden instruments of Africa.

This work had an extremely fast tempo and was interesting in that Dyens used the full capacity of the guitar by banging on it and picking violently at the strings.

This created sounds one would not think could be produced by the instrument.

Overall, the songs that were played were simple.

Yet Dyens was such an accomplished musician that when he played, it sounded as though there were instruments other than the guitar accompanying him on stage.

Numerous audience members agreed that the artist was extremely gifted.

“The way in which he transitioned from soft sounds to heavy chords was very incredible,” she said.

He said that Dyens simply had “a beautiful, magical style to his work.”