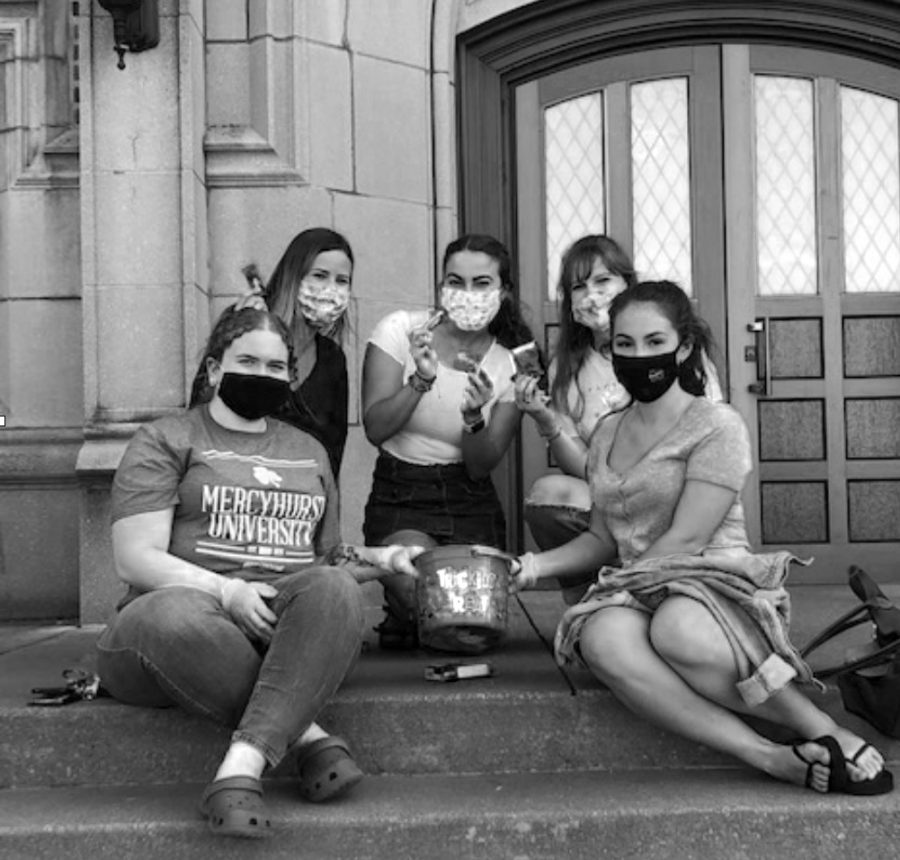 Spooky season is apparent here at Mercyhurst. Even the leaves are bright fluorescent orange, showing their Halloween spirit. This year, Halloween is on a day with a full moon, blue moon, and Daylight Savings time, so students and RSCOs on campus have much to skeletonbrate.

Monster inflatables are lining the sidewalk outside of the town-houses on Lewis and 41st street, where a reverse trick or treating event will be held for the Lewis neighborhood. The Lewis Neighborhood RAs will all pair up on Oct. 31 and distribute candy to each residence to promote the Halloween spirit. They will also be dressed up in costumes for added amusement.

RA Hannah Buncher said that the event would be fun and promote a sense of unity in socially distanced times.

The Honors Council also hosted a Trick or Treat Scavenger Hunt for the Honors students. Each student gets clues sent to their emails, and they will be able to travel around campus and find tasty, pre-packaged treats from the Honors Council members. There will be six locations spread out all over campus that the students can find and be rewarded with some candy in return.

The Honors Council students had to get creative with a socially distanced program since the usual annual pumpkin carving contest was not feasible this season. Justin Ross, Ph.D., the Honors Program director, enjoys when these kinds of events happen be-cause it allows more social participation in a typically more academically rigorous program.

Irish Club is also joining the Halloween festivities with an authentic touch. They are hosting their annual Samhain Event, named after a Celtic Festival that marks the end of the harvesting season. Samhain starts on the evening of Oct. 31 and ends on Nov. 1, and dates back to over 2,000 years ago.

Nov. 1 was the Celtics’ new year, and they believed on the eve of the new year, the boundary between the dead and living would become blurred, and the deceased would come back to Earth. People would disguise themselves in costumes so as not to be recognizable to evil spirits, creating the traditions we have of fancy dress on Halloween today.

President of Irish Club, senior Michelle Benedetti, wants “students to get a little break from their day-to-day lives and to learn a little about the history of Halloween from this event.”

They plan on having some traditional games, trivia, and tarot readings. During this festival, people believed that predictions could be made, hence those tarot readings. It is an exciting event that combines Halloween’s history with fun activities.

Finally, Fashion Council hosted a Haunted Hurst Hunt to get everyone in spooky spirits. There were eight teams dressed up in a costume that was later a social media costume challenge. Besides the costumes, each team raced across campus to find the Halloween-themed shoe located at each location and texted in a picture to get the next clue.

There were a total of 13 sites all across campus that the teams had to find.

Vice president of the Fashion Council, Olivia Heasley, was excited to host a fun event that allowed students and professors to go outside and learn about Mercyhurst’s spooky history.

The winning team was made up of Lea Chojnacki, Daisy Clark, Marissa Drozdziel, and Olivia Gullo. The winners received a “Halloween Night In” basket. Chojnacki thought that the most challenging location to find was the admissions parlor, which is rumored to have a ghost.

Although that is not all of the events on campus for the Halloween season, there are many ways to celebrate on campus despite the current social distancing needs. Students are excited and ready to dress up, eat treats and be scared!