The building of the Academic Engagement Center isn’t the only construction occurring on Mercyhurst College Campus. Bulldozers have been tearing up the front lawn for the past two weeks.

This construction in front of Old Main is dedicated to Mary’s Garden.

Mary’s Garden will consist of the Mary statue, a reflecting pool, benches, new landscaping and sidewalks.
Assistant to the President Monsignor David Rubino, who is the head of this project, said the main idea behind the garden is to create “a space where students and faculty can relax and talk.”

Buehler & Associate rendering: This rendering from the construction company shows what the area will look like upon its completion. There will also be another walkway further north leading to the new building.

“Who on a nice day doesn’t want to go outside and sit somewhere?” Rubino asked.

Senior Steve Bukowski commented on the outdoor area and whether students would use it.

“I think it sounds good in theory, but we need to wait and see,” he said.

The idea for the garden came about when Rubino and President Tom Gamble, Ph.D., were discussing plans for the college.

“That’s our front door in a sense,” said Rubino. “We thought we’d take advantage of this lovely space.”

He said no signage for the university has been decided on, so this garden is a possible place for a Mercyhurst University sign. The gates, which say Mercyhurst College, will not be changed.

Rubino talked about how important the Blessed Mother is and how she relates to Mercyhurst.

Mary was a “woman of great faith and courage,” said Rubino. “That’s a powerful example to remind ourselves of. To remember that is a good thing.”

Once the idea came about for the garden, plans were drawn and Rubino showed them to a donor.

The donor, who wishes to remain anonymous, donated $200,000 for the garden.

The remaining funds for the garden come from the $114,000 that was left over from the entrance-way renovation, which included planting trees and adding sidewalks near the gates.

As part of the creation of Mary’s garden, the statue of Mary, which has been in front of Old Main since the 1950s, has to be restored. The marble statue had fingers and toes missing.

As part of the restoration of the statue, Mary will face toward the campus gates. In the past, her back was always toward them.

Rubino said the statue probably faced and protected the nuns and students inside Old Main.

“Turning her out to bless the college and the city is the better thought,” he said.

Since the purpose of the garden is to be a peaceful and quiet area to relax, the circular drive will no longer be open to cars unless there are large events happening on campus. The gates will be closed at the bottom of the drive to block entrance to cars.

The reflecting pool, which has lights and will be between 12 and 18 inches deep, will add to the relaxing atmosphere. During the winter, the pool will be covered. 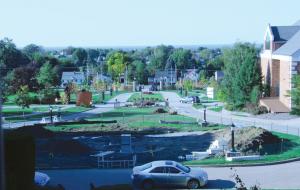 Jill Barrile photo: The construction taking place in front of Old Main should be done by March 2012.

Junior Chelsea Morris said she liked the idea of having the reflecting pool, but she does not like that the construction is taking place now.

“I think it was stupid to have construction during Parent’s Weekend,” she said.

The basic concrete structure of the garden will be completed in early November, but landscaping will not be completed until the spring. The statue should be back in March.