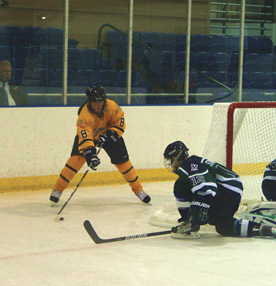 Jill Barrile photo: Senior Jill Szandzik is looking to finish off her college hockey career strong. She will be one of only three defenders with college experience.The transition from high school to college can be a difficult one.

There is the awkward process of making new friends and learning the ins and outs of a new place. If it’s tough to do once, try doing it twice.

The loss put Szandzik’s and Buquet’s hockey careers in jeopardy, but they had options.

In women’s hockey, players can transfer schools with ease. Men are forced to sit out a year before playing for their new team. Women can transfer and play in the same year at their new school.

The two players could stay at Wayne State and finish up their degrees without playing hockey, or they could transfer to a different school and resume their athletic careers.

They chose conference rival Mercyhurst as their new home.

After Mercyhurst lost its top three forwards and top two defenders, there was plenty of room to welcome in the new players.

The transition has been easier than expected.

“The girls were very accepting right away,” Szandzik said. “The dynamic is great, and the chemistry is fantastic this early in the season.”

It didn’t hurt to have a fellow teammate with her in Erie. 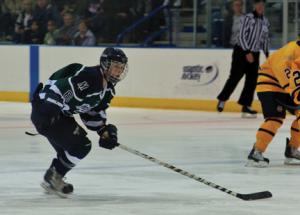 Jill Barrile photo: Junior transfer Gina Buquet had one assist in her first series as a Laker. She will be relied on to step into the line-up on a young Lakers team.“It is like bringing a little bit of home with you,” Buquet said of Szandzik.

Even though the transition has been smooth, there are still plenty of adjustments to make.

“It’s weird going from a big town to a smaller one, but it’s more personal which I like,” Szandzik, a Detroit native, said.

Both players also managed to find a place they are familiar with. Wayne State has played Mercyhurst four times a year since joining the CHA in 2002.

“I was very familiar with the success here, and I wanted to finish off my career with a chance to win,” Szandzik said.

Both players are grateful to have found a new team and are looking to help the Lakers capture a 10th straight CHA title.

“I don’t plan on just stepping in right away and taking over, I know I need to work hard,” Szandzik said. “Anywhere you go you want to work hard.”

“We are embracing being at Mercyhurst, and we are all in,” Buquet said.

So far, the pair has played well with their new team. The Lakers are 1-1 to start off the year and will travel to Minnesota State University-Mankato for a two-game series beginning Oct. 7.