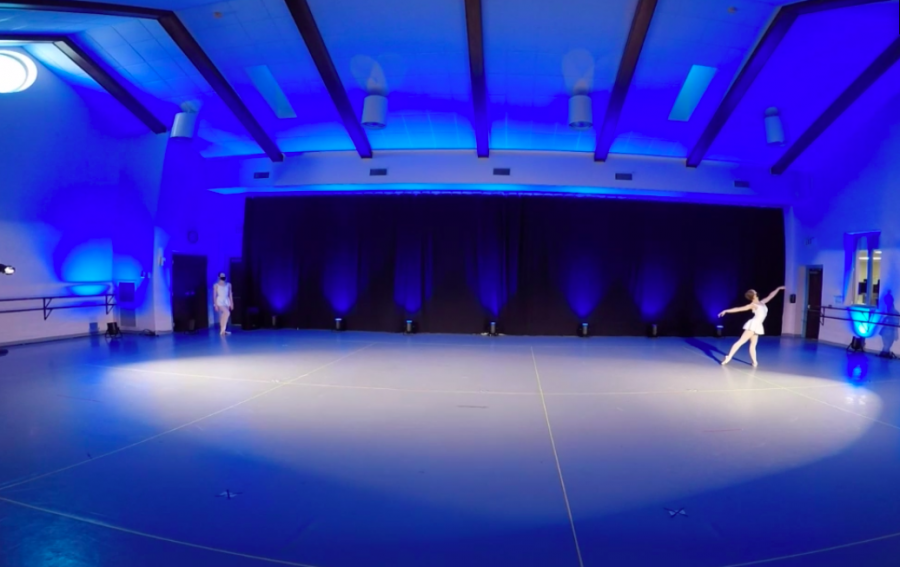 During the average year, the Mercyhurst Dance Department offers various choreography classes ranging from I-IV. Each of these classes culminates in a final showing of student choreography, from a small performance in the studio for sophomore choreographers, to a fully ticketed show on the Mary D’Angelo Performing Arts Center stage for the seniors’ choreography capstone course.

Unfortunately, live shows are not permitted in the current climate of the world – as we all well know. Even so, choreographers still need to have their final. Thanks to Zoom, this was possible.

The Palmer studio in the Dance Space – fondly referred to as “the fish bowl,” was temporarily converted into a makeshift stage for the showcasing of Choreography III.

Black curtains were hung over the mirrors, and booms with lights were brought in to give a fully lit experience. This allowed for an ambient background of blue and a spotlight in the middle. Cameras were also set up in the corners for filming.

Groups went into the studios over the weekend, and each work was filmed one at a time with the floors sanitized and mopped in between. All of this footage was compiled and shown over Zoom, with one day for the juniors and one for the seniors.

Thanks to being remote, family members from near and far were able to attend, many of whom would not have been able to make the journey to Erie, Pennsylvania in a normal year.

Each choreographer picked their own dancers and music and found inspiration in their worlds to create movement. The junior class showcase, titled, “Reflections,” included nine works from an interactive piece about voting where the outcome is decided by the audience. Additionally, there was a piece inspired by the Greek myths of Cupid and Psyche.

The senior showcase included eleven total works that were equally diverse in their subject matter. The dancers performed everything from classical ballet, to jazz, to tap, to contemporary ballet and back again.

One work from the senior showcase was choreographed by Austin Duclos, senior Dance major. His creation, “Beholden //”, was a work of female empowerment based on the ideals men place on women for complacency. The woman was displayed as more than a docile kitchen furnishing through the use of more masculine movement and innuendo.

Clearly, dance students can easily be inspired by issues they see in their surroundings and a desire to facilitate change. Of course, one such change was that these powerful works were presented digitally instead of with the raw power of being in person.

“The colors, costumes, prop-work and some formations are not easily displayed on a 2-D screen,” Duclos explained. “The cast [of “Beholden //”] had 12 notecards of specific words used to describe women dating back to the 1400’s which are not able to be read on the recording.”

Details such as this are lost online and can completely negate the message and feeling behind the work.

Despite the setbacks of this semester, the Zoom showings of “Reflections” held an impressive number of audience members and was highly enjoyable for all who watched. There is certainly something special about seeing dance, especially in a showcase of such diversity in subject matter and movement.

Next semester, the seniors of “Reflections” will be staging their capstones in “Raw Edges”. We are all looking forward to viewing the culminations of their time at Mercyhurst for their final Performing Arts Center debut.